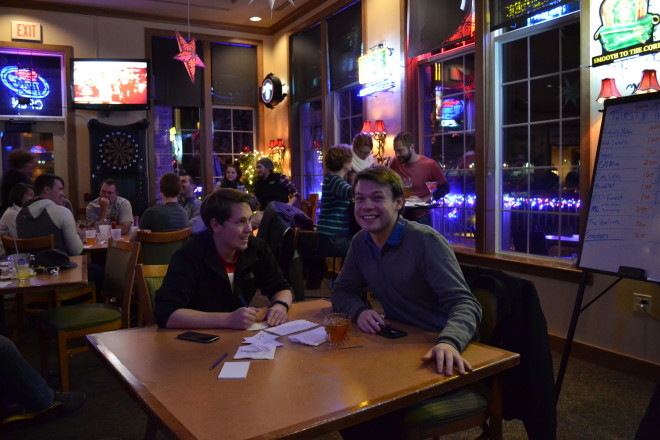 Matt Huston and Lance Treadeau, of ML & the Electric Jazzmonkeys, at a recent Thirsty Thursday Trivia night at Stone Harbor.

It was 52 degrees and falling when we pulled into the Stone Harbor parking lot on a recent Thursday night, a not-so-gentle reminder of the colder, darker months to come.

Making our way across the bar to a table for three, we looked around in anticipation of the first of what has become tradition for many a local in the off-season: trivia night.

It was an excitement shared with dozens of others who packed the bar this particular evening, hopeful for a chance at the hundreds of dollars worth of prizes given out to winners. Admittedly that hopefulness was not a shared mood for me and my teammates, Macey and Vanessa, who despite their low confidence in our trivia abilities, had enthusiastically responded to my trivia night invitation the evening before.

Within minutes of arriving, local MC Nick Freimuth had welcomed us to trivia night and prompted us for a team name.

“Let’s be The Walrus!” Macey exclaimed, paying homage to our shared love of The Beatles. I wasn’t so sure, until a glance at the team names on the scoreboard made it evident that The Walrus would fit in fine next to teams like Trebek’s Mother, Dumb Schlitz, Badass Mother Cutters, and Whiskipedia. With our name on the board, the night was off.

Trivia night began with a five-point true or false question about author J.K. Rowling’s work for Amnesty International prior to writing the Harry Potter series (a question for which every team received five points on a technicality, when Nick first read the question and referenced J.K. Rowling as a “he,” causing all of us Harry Potter nerds to determine the answer had to be false because Rowling is, indeed, a female). 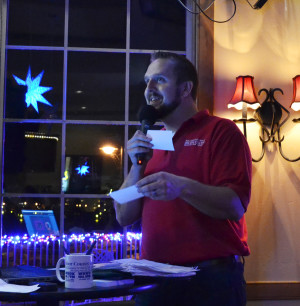 But the 17-way tie didn’t last long. Points were determined by the speed of answering, and were given as follows: 20 points to the first team, 15 to the second, 10 to the third, and five to any team that answered correctly. We ran through the gamut of trivia categories: geography, sports, art, history, presidents, pop culture, local facts and history, and a favorite new addition, name that tune.

Questions are culled from Rotary Trivia Nights, research, and talking with locals for the Door County aspect. Nick also has a knack for thinking quick.

“I’m making questions up on the fly all the time,” Nick says. “My job when I get there is to find out where everyone is from; we had some Michigan people there, so I wanted to throw two or three Michigan questions in to make them feel welcome. I knew we had engineers in the crowd so I put in math questions. It’s really important for me to keep everyone interested. There’s a group of art teachers that comes so I always have art questions for them and then they feel like they have a sense of ownership of it, and that’s what I want.”

Team Walrus steadily gained points, but never secured the 20-point first answers that I would come to find make or break your team’s chance of winning, though we had a few 10-point gains and plenty more laughs than disappointments.

As competitive as teams can get, there are moments when the collective is stumped and rather than toss in a throwaway answer, people write down the funniest thing they can, as was the case when asked for the name of the song by Asian recording artist Kyu Sakamoto that reached number one in the United States Billboard Hot 100 in June 1963. I can’t recall if anyone had the right answer because I was laughing too hard at the answers, among them “Domo Arigato Mr. Roboto.”

“That is a huge part of the second half,” Nick laughs. “The first round, people are still conservative, they’re still finding their groove and then a couple of beverages later and all of a sudden, the answers turn hilarious. We encourage that. I try to keep it as G-rated as possible.”

At the end of round one, we held a modest 85 points, 115 behind the scoreboard leaders ML & the Electric Jazzmonkeys. Their team, tonight comprised of Matt Huston, Lance Treadeau, Alex Sowinski and Lauren Seward, is a regular part of Thirsty Thursday Trivia at Stone Harbor. 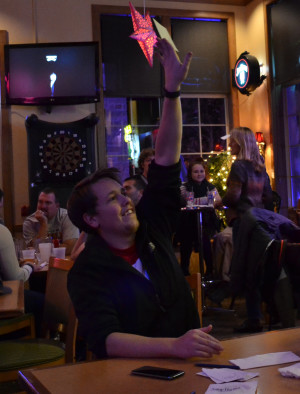 They draw from a bank of 5-7 friends and those who show up know their specialties: Matt with Russian history; Lance with politics; and the “old person on the team,” 31-year-old Alex, who is responsible for catching references for things prior to 1995.

“When the question starts, the pen will go to the right person,” Lance says. “ … Write really fast and hardly legible, and as you know, the first answer gets 20 points. Those make or break the game right there.”

Another very necessary component of staying toward the top of the pack, according to the MC?

“Diversity,” Nick says. “Diversity in age, sex and occupation. You need an even split of men and women, you need to have young and old because you heard, we did 1960s music and we did 1990s/2000s music. I think having a 50 to 70 year old is important, one or two 30 to 40 year olds, and you need to have a twenty-something on your team too.”

At the end of the night, that diversity helped propel Trebek’s Mother to a first place finish with 380 points and the grand prize pizza party. Second place secured vouchers for a soup and salad buffet and third place won a round of drinks.

Team Walrus, on the other hand, left with a measly 160 points, defeated in theory but not in mood. We were just pleased to know where we’ll be spending some of our Thursday nights this off-season.