Her name was Thalia and she tended bar at a local dive in Chicago’s Logan Square. She was a Canadian girl with long black hair, bewitching eyes, and no green card. My husband was a bit besotted with her and honestly, after she made me my first hot toddy, I was too.

It was a late November evening, and I felt myself coming down with a nasty cold. Thalia bid us sit at the 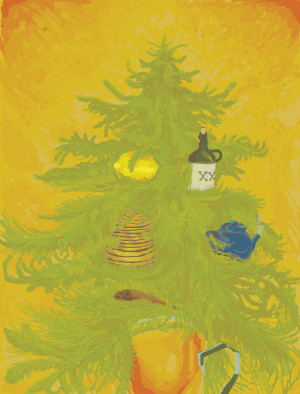 darkened bar and proceeded to boil water, squeeze a lemon, and pour some golden liquor into a large mug.

The results made me feel quite nice at the time, but the real proof was in the morning. I woke up feeling like a champ, with nary a trace of stuffiness, sneezing or sore throat. I remember thinking, “that stuff was magic.”

By definition, a toddy is a drink, hot or cold, that combines water, distilled spirits and sweetener. Hot toddies in particular are legendary for their healing powers. Perhaps it’s the vitamin C in the lemon, or the naturally soothing quality of honey. Maybe it’s the bourbon that burns away the germs, but at any rate, winter in Door County is the perfect affliction for this prescription.

Whether it’s a warmer-upper after a starry midnight walk or cross-country ski, or a wind-down after a long day, toddies soothe both the throat and the soul.

By the way, my husband wanted to name our firstborn daughter after Thalia, which I, with some justification I believe, refused. But I’m happy to christen this cocktail in her name.

juice of one half lemon

If you’re looking to spice up your toddy recipe, there are plenty of add-ons to consider. This version would make a perfect accompaniment to a late-night slice of apple pie, a bowl of popcorn, or a plate of cookies.

juice of one half lemon

Peel the ginger root and cut into thin rounds. Bring sugar and water to boil over medium heat. Add sliced ginger and bring back to a boil. Remove from heat and let sit for 30 minutes. Pour through a mesh strainer. Syrup will keep for up to a month refrigerated in a glass jar.