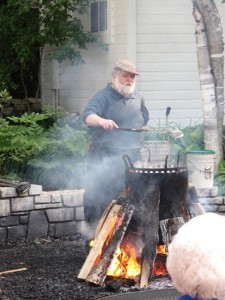 “You’re going to become a little famous whether you want to or not,” says Master Boiler Tom Christianson, whose image may appear beside a ball of flames in one of your Door County photo albums.

For the past 18 years, Christianson has been photographed countless times as the master of the fish boil at The White Gull Inn in Fish Creek.

“I’ve been asked for an autograph three or four times,” he says. “Somebody did an oil painting of me doing the fish boil. Kids draw pictures once in awhile of me doing a fish boil.”

He learned the craft from Russ Ostrand. The trick to the perfect fish boil, he says, is “the right amount of salt and giving the customers a nice flame.”

Creating the perfect flame is a process that begins hours prior. “Two hours before the actual boil over, I build and start the fire, put water in the pot. About a half-hour before the boil I joke with the customers that I put in just a pinch of salt, but it’s somewhere around two pounds,” Christianson says, “and the potatoes. Then about 10 minutes before the boil I put in the Lake Michigan whitefish chunks. The fats and oils come up to the top of the water and I throw kerosene on the fire.”

A burst of flames causes the fish oils to spill over the side of the pot. Dinner’s ready!

Christianson eventually came to realize that his job was more than cooking a meal.

“For a long time I thought, ‘I’m just cooking you dinner’,” he says. “But I guess it is more of a show than just coming to eat.”

Diners learn about the tradition behind the Door County fish boils, how they’re prepared, and the purpose of the boil over.

“You get asked a lot of different questions and I’m not a big fisherman,” says Christianson. “So I would get DNR books that pertained to whitefish. It’s important that when you are interacting with customers that you come off knowledgeable. They want to know how they are netted, what depth they are caught, what they eat.”

At 58, Christianson says he’s getting close to hanging up his pot, but will always hold fond memories of his fish-boiling days.