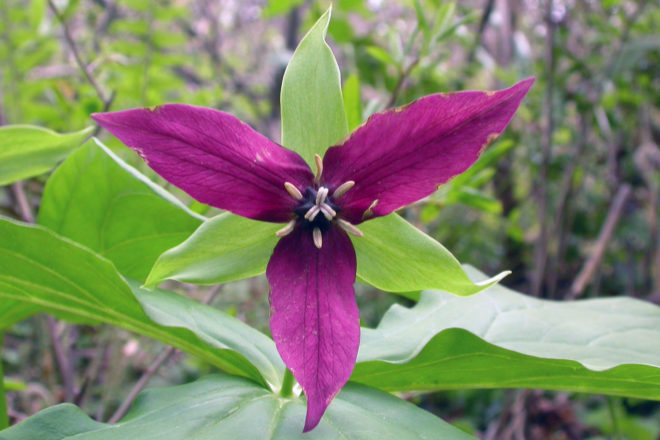 I grew up in Milwaukee and never knew what a trillium was until I moved to Baileys Harbor after my late husband, Roy, and I were married in 1972. The spring hardwoods in some areas are generously adorned with trilliums in the month of May. That summer was the beginning of a longtime nature-education experience for me.

The giant white trillium (Trillium grandiflorum) was the first one I learned about, but few grew in The Ridges Sanctuary, where we lived. Trilliums prefer deciduous woodlands, and most of The Ridges is a boreal conifer forest with just a few scatterings of broad-leaved trees. This is the species that is most common in our area and in the whole state. It has been named the provincial flower of Ontario, Canada.

The Ridges Sanctuary is a good place to find the nodding trillium (T. cernuum), whose smaller flower hangs almost out of sight below its leaves. It thrives in many types of woodlands — especially among the cedars, pines, spruces and firs of the region along the eastern side of the Door peninsula. I have seen it at Toft Point State Natural Area and in the Rushes Preserve near the southwest corner of Kangaroo Lake. In postglacial times, Kangaroo Lake was actually a bay of Lake Michigan.

Roy always hoped to find the snow trillium (T. nivale) somewhere in Door County, but he never did. A friend told us about a site in Brown County southeast of Green Bay where we were able to find and photograph them. It is the earliest species of trillium to bloom, sometimes in late April. Perhaps that’s why it is called the snow trillium — remember last April? Later a friend mentioned that she had seen some growing in woods on the west side of Green Bay. Its population in the state is limited, and it is on the list of threatened plants.

In December 1977, Roy and I purchased nearly 17 acres of wooded land between Egg Harbor and Jacksonport. The following spring when we walked our property, we were absolutely amazed at the variety and abundance of ephemeral wildflowers — those that blossom in early spring before the leaf canopy develops to shade the ground — growing there.

We didn’t build our house until the summer of 1982. It was pure joy to walk all parts of our acreage to discover new species of flowers and shrubs, and Roy spent many hours photographing them. Some interesting finds included unusual giant white trilliums: one had four leaves and petals instead of the normal three, and a few grew with beautiful, green streaks within the white petals, which we thought was a rare, new species.

The wonderful book Trilliums by Frederick W. Case Jr. and his wife, Roberta Case, told how this green-and-white form occurs. The plant is infected with a mycoplasma that is a subcellular organism midway in size between viruses and bacteria. They are considered ultimate parasites — they cannot exist on their own — and they cause distortions that are not desirable in trilliums.

The red wake robin is listed for only one southern county in Wisconsin and may be one of the rarest species in our state. It is more common in the Appalachian Mountains, New England and up into southeastern Canada. Wake robin is a common name, and in various parts of the country, it is given to several other trilliums such as our giant white trillium.

It was the first week of May in 1975 when Roy and I camped in the Great Smoky Mountains National Park. The weather was delightful, and many spring flowers were in bloom. This is where we saw our first yellow trillium (T. luteum), with its three petals standing upright as if in close conversation. The large, green, mottled, sessile (meaning no stalk or petiole) leaves fanned out directly below the blossom, all supported on a tall stem. The yellow flower smelled, appropriately, like lemons.

A friend called us in May 15 years ago to invite us to a home where three multi-petaled giant white trilliums were growing. These flowers were absolutely gorgeous, and the blossom heads were so heavy that they hung downward, unlike a normal large, white trillium. We learned that this type is sterile and will not reproduce others like itself.

During a trip to stay with friends in Florida in 2002, we made a visit to Calloway Gardens in Georgia. The azaleas and flowering dogwoods were in full bloom in this spectacular, 14,000-acre paradise. That is where we discovered the deceptive (or deceiving) trillium (T. decipiens). This one also has lovely, mottled leaves, and the deep-maroon flower stands upright like the yellow species.

For many years, one place that was on our bucket list of parks to visit was the Joyce Kilmer Memorial Forest. We finally went to hike there in late April 2013. It is a 3,800-acre section of a large wilderness preserve about 100 miles west of Asheville, North Carolina. This particular part has some slightly rugged trails in the mountains where you can see huge trees and many wildflowers. It honors Joyce Kilmer, who died in World War I — the man made famous by his well-known poem “Trees.”

I think one of the most spectacular species we encountered there was the painted trillium (T. undulatum). Its petals are marked near their bases with a vibrant rose color that streams outward on each white petal in red lines. The species name “undulatum” refers to the wavy or undulating edges of the flower petals. Western North Carolina is the southernmost part of its range, which goes northeast to the Canadian Maritime Provinces.

Another species we saw at the Joyce Kilmer Memorial Forest was the purple toadshade (T. cuneatum). It grows from southern Kentucky down to central Alabama and Mississippi. The identification of this species can be difficult because three other forms of the flower grow in the same area.

Get out to enjoy the spectacular, ephemeral spring flowers now that spring has arrived. Learn more about native wildflowers such as trilliums, and work to protect their habitats.