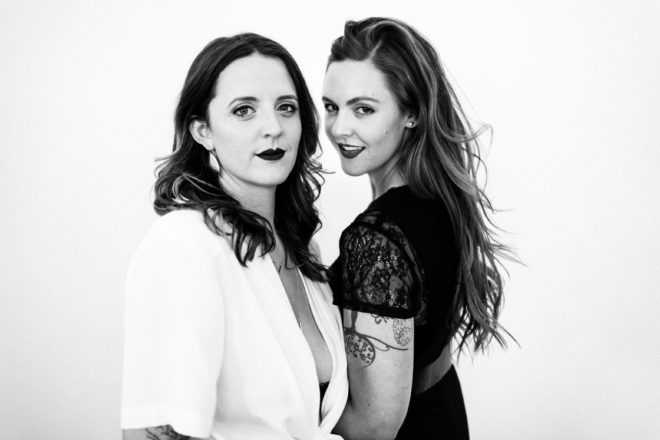 Becky Shaheen and Laura Lou know that you don’t need to be siblings to share that special bond with someone. Their bond is through music – but then there’s also their strikingly similar appearance. These “sisters” make up The Twins of Franklin, the moniker for their indie-folk duo.

They met in Minneapolis, where they attended Augsburg University, a small liberal-arts college. Specifically, they met in a vocal-jazz group that’s now called Jive but was then called Gospel Praise. Lou was starstruck by Shaheen, who was already writing music at the time. They were in choir together, but when Lou joined the group, that’s when they really started to get to know each other.

“I was in love with her,” Lou said. “I was obsessed with trying to be like her.”

Lou and Shaheen have found that they’re a duo in more ways than just music. Lou, who’s originally from Green Bay; and Shaheen, who grew up in Minnesota, noted how Wisconsinites tend to party a bit harder in high school. Lou followed that trend in college while Shaheen was studious. They’re opposites who balance the other’s flaws, Shaheen said.

“Laura helped loosen me up and not be such a goodie-two-shoes,” she said with a laugh.

The Twins have rubbed off on each other in ways that inform their music as well. Before they became a duo, they each contributed to the other’s solo albums. Though they were performing together during those times, they thought it was important to lift each other up on their solo endeavors, Shaheen said.

Now they’re working on releasing their first album as a duo this fall or early winter. Singles “The Rope” and “What’s the Point” are good testaments to what the album will encompass: a mixture of genres including pop, indie-folk and even a country track.

“It’s a little bit of a charcuterie plate, if I may,” Lou said.

See The Twins of Franklin during the duo’s Door County debut – at Stabbur in Sister Bay on Aug. 31, 7 pm; and Sept. 1, 2 pm. If you want a preview, the Twins have concocted a playlist of their solo albums and singles at open.spotify.com/playlist/6mzTWkA6NnwzxnT7TRpiGj?si=b0vP_tJgSdqZ1Z_WYeuQGw. And, listen to the podcast we did with Shaheen and Lou in anticipation of this Door County show at doorcountypulse.com/podcast-one-on-one-with-the-twins-of-franklin.