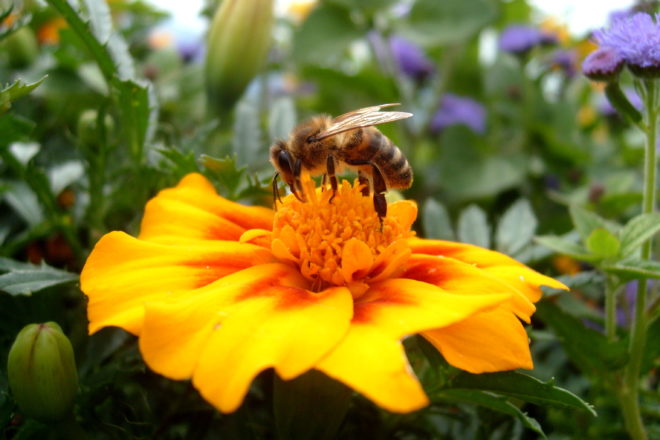 A honeybee gathers pollen. Photo by Christopher Down.

The survey queried more than 20,000 honey beekeepers about the number of colonies, colonies lost, colonies added and colonies affected by certain stressors and gleans state-level estimates on key honey bee health topics. The survey was developed as part of the “National Strategy to Promote the Health of Honey Bees and Other Pollinators” released last summer, and gleans state-level estimates on key pollinator health topics.

Beekeepers across the United States lost 44 percent of their honey bee colonies during the year spanning April 2015 to April 2016, according to the latest preliminary results of an annual nationwide survey. Rates of both winter loss and summer loss – and consequently, total annual losses – worsened compared with last year. This marks the second consecutive survey year that summer loss rates rivaled winter loss rates.

Results from the survey will provide statistically strong baseline information about honey bee losses and can help guide honey bee management decisions in the United States. NASS created the survey questions with input from beekeepers and researchers, and other stakeholders. The results will allow USDA and other federal departments and agencies to create a more unified and complementary approach to implementing the National Strategy, which was unveiled in May 2015.

“Pollinators are essential to the production of food, and in the United States, honey bees pollinate an estimated $15 billion of crops each year, ranging from almonds to zucchinis,” said Dr. Ann Bartuska, USDA Deputy Under Secretary for Research, Education and Economics. “This new data will add to USDA’s robust scientific body of knowledge on the inventory, movement and death loss of honeybees in the United States.”