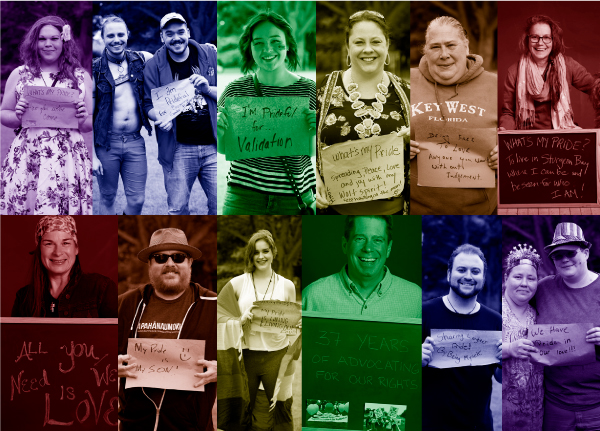 “I thought, ‘Why don’t we do a version where we ask people to write on a chalkboard what they’re proud of?’” Grier said. “What a great way to show the faces and stories of people who support Pride.”

The subjects of the photos are diverse: young, old, members of the LGBTQ+ community, allies, families, couples, friends and individuals. Certain elements remain constant, however: In each photo, a sense of joy and an atmosphere of unconditional welcome are evident in the subjects’ smiles and responses.

What’s my pride? is a deceptively simple question that comes with many layers. When participants answer, they’re also answering questions such as, What am I passionate about? Who are the people I love? What have I worked really hard on? What have I accomplished?

In her photograph, Sturgeon Bay abstract artist Monica Ramirez commemorated her now-20-year relationship with her partner, Cindy; her beloved cats; and her passion. She’s pictured holding a chalkboard that reads, “What’s my pride? My girl, my kittens, my art.”

“This project is an expression of people coming together for pride, whatever your pride may be,” Ramirez said. “And in this day and age, it’s more important than ever to be vocal.”

Jerod Santek, an Open Door Pride board member, is pictured holding a chalkboard that reads, “37 years of advocating for our rights.” Tucked into the chalkboard frame are two photographs of Santek’s past efforts in support of LGBTQ+ rights: Throughout the ’80s and early ’90s, he worked for HIV/AIDS support services and advocacy groups.

“That was obviously a very challenging time for our community,” Santek said. “People who had HIV/AIDS felt very isolated and were very mistreated. I’m very proud that there isn’t that same level of stigma about HIV/AIDS now.”

Grier’s goal for the What’s My Pride? project was to increase the visibility of the LGBTQ+ community in Door County while also providing people who might be unsure about what Pride is with the opportunity to participate and learn.

For Grier, the process of community education and LGBTQ+ visibility has steadily progressed in Door County since she moved here. For example, in 2017 and 2018, Sturgeon Bay proclaimed an official Pride Day. In 2019, Pride Day expanded to a week. This year, Sturgeon Bay has officially proclaimed June as Pride Month.

“The evolution of Pride in Door County has been huge, and it has all happened through these small changes,” Grier said. “What I’m currently most proud of is that Open Door Pride is now in its fourth year. We’re here, and we’re growing, and I’m so proud of this community.”

Although members of the LGBTQ+ community and allies have always been part of Door County, the Open Door Pride Fest has been instrumental in providing a place where people can comfortably gather and celebrate. The fourth annual Pride Fest would have taken place this year on June 27.

Both Santek and Grier called attention to another sign of progress: an increase in the number of Pride flags flying around the county. For Grier, flags are an important symbol of solidarity and serve as visual reminders of the support that’s available in Door County, should one need it.

“I want to fly a Pride flag because someone might be driving by who was just bullied by a parent or friend and maybe sees the Pride flag and realizes that they’re not alone,” Grier said.

As is clear while browsing through the photos in the What’s My Pride? project, the LGBTQ+ community and its allies in Door County are not only present – they’re active, welcoming and proud to call Door County home.

To participate in this project, write your response to the question “What’s my pride?” on a sign and take a photo. Then post it to social media with the hashtags #WhatsMyPride and #OpenDoorPrideProject or email it to [email protected].