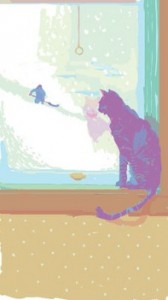 Cats die, that much is known. That they do not die easily is the shared suspicion. Nine lives being the standard appropriation to cats.

Christianity and Islam both advertise immortal life, to suspect this is an attempt to out-do or at least out-bid cats. A bidding war to out-live cats with nine lives, about the same thing happens at a farm auction. Particularly on rainy-day auctions when two dirtballs simultaneously get the sole-possession complex into their head. Nothing more gladdens the heart of an auctioneer when the bids arise spontaneously from the crowd without any need for hog-calling. Cats and Christianity have been head to head in this grudge match ever since the Jericho Road in the shade of John the Baptist’s head. The cats quit immortality at nine lives if Christianity has gone on to out-bid stars and galaxies, including black holes and white dwarfs as is a blame long time to be immortal.

As a country child I was not convinced that cats had nine lives, as much as some novel agility when it comes to actually being dead. A cat is plainly hard to kill, as a kid I believed their being cute helped. Some animals have the dash bad habit of being born ugly, alligators come to mind, neither is there much cute about fish or lizards. Cats arrive cute same as puppies. Cats might score no better on the SAT than alligators and snakes but nobody has to learn to love cats.

Eventually people, some who love cats, learn to be democratic about this and discount ugly as a reason for justifiable homicide, by which point you’re probably an ecologist. Problem being education is required, until you appreciate swamps, snakes and mosquitoes thick as tire smoke there is no ready inclination to greet a snapping turtle as Prince Charming. Same goes for dragonflies or a coyote eating the heart out of a day-old fawn. The way I see it cute counts as three or four lives outright, add the kind of fur a kitten has, you can add two more lives.

If it weren’t for the built-in spare lives of not being born ugly in the first place cats would suffer death at the dinner plate the same as every other critter. This is the reason we eat lobster and clams and venture deep cold oceans at our peril despite cats are readily at hand. All those extra lives a cat gains by starting out cute. A little more plain-Jane ugliness and there’d be cat ranches instead of angus beef ranches to acknowledge that cat ranches take up a lot less space. Instead of beef cows we’d have meat cats. About three foot wide at the shoulder, artificially bred, able to pasture on trees, an easy thing is cats enough to enhance the food supply. A vast improvement over the cow when every household could have a little sideline raising mice and a herd of beef cats.

It is my personal belief that cats pound for pound are the smartest animal on the planet. This theorem came to me on a day when I had just spent eight hours plowing snow, I came to the house wet, cold and tired as my cat was sitting on the window sill watching the bird feeder. Another was curled up on the sofa where it had spent most of the day.

The Bible suggests mankind was made in the image of God, my guess is it’s the cat who is the image. Hence I am jealous of cats, they have it all figured out. We pay the taxes, split the wood, buy the kitty litter; they spend the snowy day on an heirloom quilt. No other animal including ourselves is so capable at the fine art of living, one moment in the penthouse high above Central Park, at the next living nicely off the fauna of Central Park. I have friends who mourn the old days of hunting when a man could kill supper off his front porch…cats can still do that. The perfect combination of housebroke and The Last of the Mohicans.

It is my guess when we calculate all the data points, quantify the graph lines, the supreme species on this planet isn’t us. The pigeon is close, the mouse is approximate, the cockroach is nearby, the ant, any of several beetles, but the sapiens of us all is the cat. I am the one who is serving bondage to three cats, not the other way around. Technically I own the house yet they get first dibs on the blankets and chairs. I cut the wood, sweep the floor, stoke the furnace, they all the while take a nap. None of this is accidental. They aren’t the pets, we are.