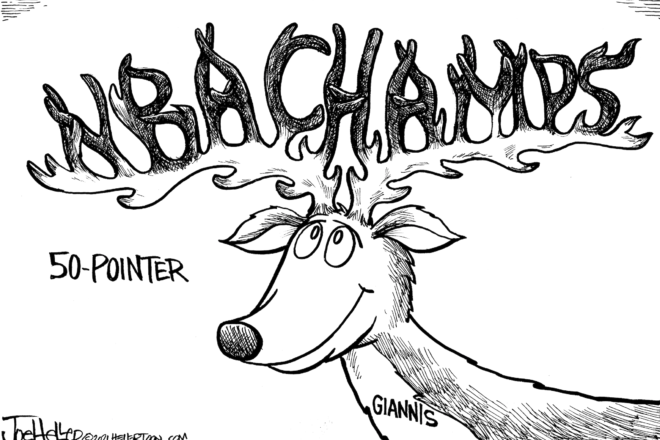 As I write this the morning after, I’d like to say I was confident as the clock ticked down to about four minutes to play in Game 6 of the NBA Finals last night.

The Bucks’ lead stretched to eight for a moment, nearing the safe zone, but confidence didn’t kick in, my defense mechanisms did. Such is the life of a Wisconsin sports fan.

There are many more. Phrases and names we’ve collected to signify stomach-punch defeats.

I’m married to a Bears fan, so complaining about brutal losses in championship games or near-championship games falls on deaf ears at my house. The fan of a team that has shelled out millions to Nick Foles, Mike Glennon and Andy Dalton simply rolls her eyes when I complain about winning the division but not a championship.

But tough losses go down easier when there’s no hope at all. It’s when the hope is real that you get the recipe for the gut-wrenching, soul-crushing loss that hangs in the fan’s head for days or weeks.

Despite the run of success the Badgers, Brewers and Packers have been on for much of the last decade or two, I’ve worked to guard myself against getting too high, in hopes of lessening the blow of that low. I numb myself, expecting the worst, becoming the jaded old man of a fan that the teenage version of me hated.

“Why do I care about sports?” I ask myself after each of those moments. I can’t quite answer that, but I know I still do. As if a millionaire coach or athlete or owner represents anything about my life.

So as Phoenix cut the lead to four with 1:14 to play, I began steeling myself. I took a deep breath. Khris Middleton pulls up for a tough, fading jumper – the kind the Bucks have been missing all night – and it … goes in! The Bucks are not collapsing! I look around at friends at the Filling Station at Husby’s who are gathered to watch the game. We scream, we jump, we hurt each other a little.

(Get a look at the Filling Station scene when Jrue made the steal, then Giannis threw it down to seal the victory. In front of the TV, you’ll see me in a Giannis jersey punching friends in…um, joy?)

But we keep taking split-second reality checks, moments when we stare at each other wide eyed, jaw dropped.

“The Bucks aren’t going to collapse?”

“A Wisconsin team is actually going to do this?”

“I’m not going to cry tonight?”

I grew up with the ’80s Bucks. Jack Sikma. Terry Cummings. Ricky Pierce. I believed in those teams because I was a kid, and you always believe in your team when you’re a kid. (I believed in Randy Wright, too.)

I hoped for Todd Day. Bought into Blue Edwards for a couple of weeks. Had a little fun watching Vin Baker. And in 1999, I came close to really believing in the Bucks’ first “Big Three” of Ray Allen, Glenn Robinson and Sam Cassell. But when the NBA decided it wasn’t going to let that Milwaukee team play in the finals, I abandoned the idea that the Bucks would ever be champions.

But Giannis Antetokounmpo was on a singular mission this summer, and each time he appeared to peak, he elevated to another level. Sure, he scored 50 in the clinching game of the NBA Finals, something Kobe Bryant, Larry Bird, Shaquille O’Neal, Wilt Chamberlain and Tim Duncan never did.

But he did it while dominating on the defensive end, making hustle plays normally reserved for the bit player fighting to stay on the roster. He attacked Phoenix shots the way Kevin Garnett would grab after-the-buzzer jumpers for the Celtics in 2008, as if to show that nothing was going to come easy. Near the end of the game, you saw it pay off as Devin Booker and DeAndre Ayton hesitated on seemingly easy layup opportunities, their eyes seeing the massive hands of Giannis everywhere, because they were everywhere.

The hands that swatted history aside and wrote a new Wisconsin sports chapter: Milwaukee, City of Champions.

He may not have exorcised all the demons of Wisconsin sports, but they sting a little less today. And he gave us a name that will forever signify something else.

Giannis: The man who brought a championship to Milwaukee.