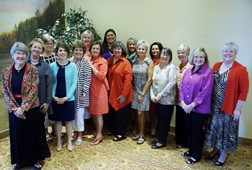 The Women’s Fund board at the Aug. 14 Celebrate Women! Luncheon.

Excitement was high on Aug. 14 when a sold-out crowd attended the annual Celebrate Women! Luncheon, sponsored by the Women’s Fund of Door County, at Stone Harbor Resort in Sturgeon Bay. The Women’s Fund board of directors spoke about successes since 2009 addressing issues facing women and girls in Door County and achieving a goal to raise $250,000 to fund annual grants for local programs.

Marti Spittel Ziegelbauer opened the afternoon telling the audience, “The Women’s Fund is putting in place building blocks to continue a tradition of strong, accomplished women for the next generation. Because of you, a young teen mom has learned parenting skills; a woman has received help establishing a budget and another woman has received help paying for transitional living as she deals with domestic violence. The Women’s Fund is dedicated to facing and helping resolve issues pertaining to women at all stages of their lives.”

At the 2012 luncheon, Spittel Ziegelbauer asked the large audience to come together to answer a challenge from the Lutsey Family Foundation to raise $25,000 in matching funds. At 2013’s celebratory luncheon Spittel Ziegelbauer announced, “You not only matched that gift but you exceeded it, raising $55,000 for the Women’s Fund.”

Spittel Ziegelbauer’s new challenge is for current members to help launch the Women’s Fund’s first-ever membership drive. “The goal is to have 300 members in the first year stand together to share the vision of the Women’s Fund of Door County,” she told the audience.