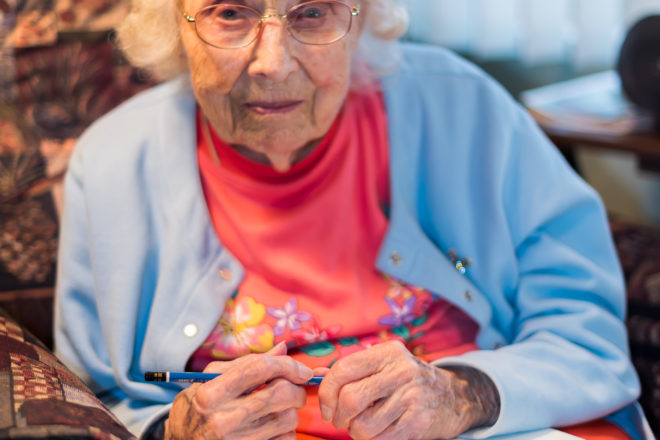 Florence Thoms works on a piece of art in her Scandia Village room. Photo by Len Villano.

If you generally savor your morning coffee down to the last drop, Florence Thoms might suggest that you save a bit of it. The exquisite painting of a mare and colt on her wall at Scandia Village was created with…yes, coffee – full strength for the darker sections of the horses’ coats, weaker for shading.

“It works fine,” she says. “And a little spray of Windex before it’s framed keeps it from molding.” She learned the technique from Tom Seagard, one of the local artists who teaches classes at Scand. He’s also in charge of maintaining the gallery of residents’ art, Meadows Art Gallery. 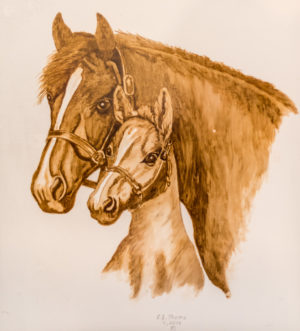 A Scand resident since 1998, painting with coffee isn’t the first unusual thing Florence has done. During the influenza pandemic of 1918-19 that killed an estimated 500 million people worldwide, her mother filled little cloth bags with fried onions for all the family members to wear on their chests. Did it work? “It must have,” chuckles Florence, who was a toddler at the time. “We all survived!”

When she graduated from high school in the mid-1930s, she joined her dad, working in a truck plant near Detroit that she believes was owned by Henry Ford. Her dad was in the experimental department, while Florence made rims for tires. Later she made M1941 Johnson Light machine guns, and later yet, after moving to Seattle, she worked for Boeing, counter-sinking rivets in the gunner’s turrets of war planes – Florence the Riveter! Obviously, she was on the cutting edge of non-traditional careers for young women.

Florence was born into a Swedish-Norwegian family of six children in Duluth, Minnesota, and lived there until she was 11. During those years, her father was a machinist at Clyde Iron Works, and her mother taught in a country school. Florence loved winter sports – ice skating, skiing and flying downhill on the toboggan her father made from an ironing board. “We lived on a hill in Duluth,” she recalls, “and we could ride that toboggan all the way downtown, but we usually didn’t go that far, because it took too long to pull it back up the hill.”

When the decision was made to move to Detroit in 1927, Florence’s dad went first and rented a room from an aunt of Bob Havens, a Dixieland jazz trombonist who played on The Lawrence Welk Show from 1960 to 1982. This may or may not be the reason Florence chooses to miss supper every Saturday night.

After WWII, she moved to Monroe, Michigan, where she engraved rubber dyes for stamping information on corrugated boxes. In 1949, she married her boss, Helmuth Thoms. They were in the engraving business for most of the rest of their working lives. They worked together in a silkscreen business they owned in Phoenix, but Florence stayed home with their son, Howard, and daughter, Elenore, while Helmuth worked in an engraving shop in Whittier, California, the birthplace of Richard Nixon. Howard attended a church school and when he graduated from eighth grade, his class was invited to a dinner at the tearoom owned by Nixon’s aunt. 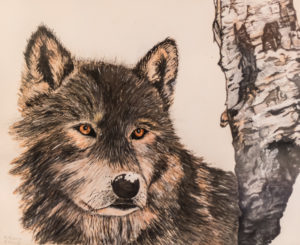 On their way from California to a family reunion in Minnesota in the early 1970s, the family drove through Green Bay and noticed an engraving shop. On a whim, Helmuth went in to talk with the owner and found he was looking for help. “He hired both of us on the spot,” Florence says, “so within a month, we were back in the Midwest, living on Westport Road.” They often spent weekends in Door County and when they retired in 1980, they built a home on the corner of Coral Hill Road and Highway 42 in Ephraim. Helmuth, who was an excellent artist, loved the area because it was known as an artists’ colony. He passed away the day after Thanksgiving in 1994.

Florence came to Scandia Village in 1998. Her son lives in Minnesota; her daughter in Oregon. Her seven grandchildren, two great grandchildren – four generations on each side of the family – and two stepdaughters are all far away, but Florence keeps herself entertained. Along with painting with coffee, she also draws and paints with watercolors. After the Rev. Delmar Dahl, also a Scand resident, told her a story about his father, as a youngster, being chased by an ox and climbing onto a granary to save himself, Florence painted the scene as a gift for Delmar, substituting an outhouse for the granary.

“It’s a long walk from her room to the Gathering Room in the Meadows,” Delmar says, “but she never misses a Wednesday art class. She didn’t start painting until she moved to Scand in 1998.”

Florence attended First Baptist Church in Sister Bay before it became difficult for her to hear, but now listens to the previous week’s service on the radio each Sunday at the regular church hour. And the reason she chooses to skip supper every Saturday night? That’s when reruns of The Lawrence Welk Show are on TV. She has always loved to read, especially stories set in Amish communities. But they’ve been set aside temporarily for a recent birthday gift – a book about Lawrence Welk.

The birthday party hosted by Florence’s church on Sept. 1 was attended by a huge crowd, including 25 of her relatives from Washington, Texas, Oregon, North Dakota, Michigan and Minnesota. Described by Delmar as “a splendid party,” it was definitely a special occasion. It’s not every day a perky little lady turns 100.