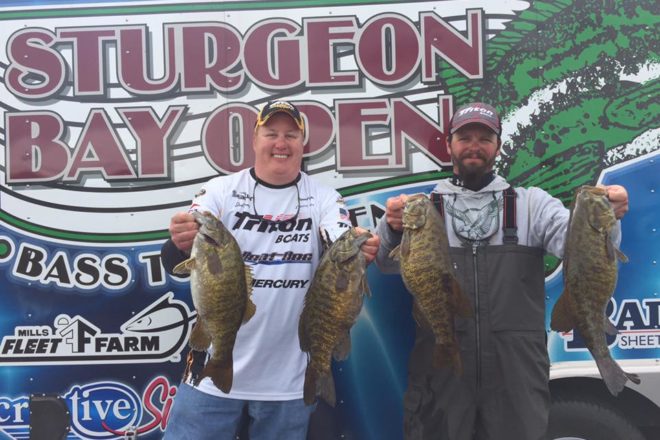 2016 winners of the spring Sturgeon Bay Open Bass Tournament were Josh Keeney and John Berrens, Jr. The pair finished the tournament with a total weight of 55.28 pounds. Photo by Jennifer Monger.

This past weekend, 168 teams took to the water and competed in the spring Sturgeon Bay Open Bass Tournament. Over the course of two days, the competitors brought in approximately 4,196 pounds of fish in an effort to take home the grand prize.

First place went to the team of Josh Keeney and John Berrens, Jr. The pair finished the tournament with a total weight of 55.28 pounds. The top prize was a boat, motor and trailer.

A full listing of the participants and their finishing place can be found on the tournament’s website.

Originally, the competition was scheduled to begin on Friday, May 13. However, the tournament began a day late due to various circumstances.

“We canceled Saturday take off because there were small craft advisories,” Wendy Heim, the tournament’s vice president, said. Six-foot waves, along with the operation of a U.S. Coast Guard search-and-rescue mission led to the decision to postpone the event. According to Heim, the tournament schedule is specifically designed so that organizers can adjust to weather conditions. The second day of the tournament could thus be rescheduled for Sunday, May 15 without difficulty.