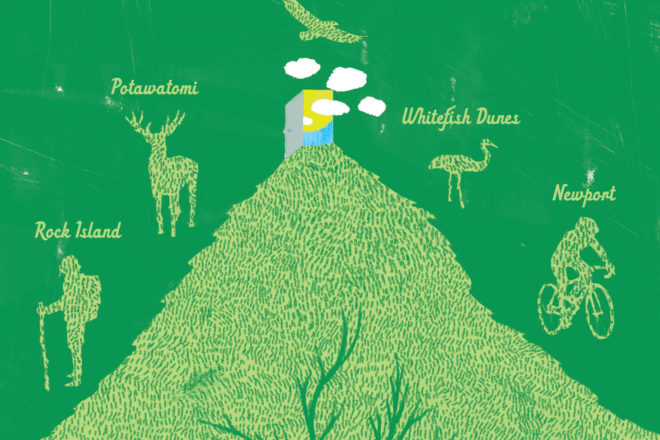 In no region of Wisconsin is the state parks system as important to its people and economy as it is to Door County.

With five state parks, including one often referred to as the prize of the system – Peninsula – Door County has more state parks than any other county in Wisconsin. They draw thousands of people to the peninsula every day of the peak tourism season, spurring millions of dollars in economic activity that spills into our restaurants, hotels and shops.

For residents they provide healthy, affordable escape from the grind of daily life, an equalizer that gives the wealthiest and poorest among us the same access to the best of the peninsula. For many of us, the parks are why we live here.

So when the state legislature cut funding for the parks and embarked on a massive reorganization of the Department of Natural Resources that oversees them, we decided to devote our 11th Sustainability Issue to the question – how sustainable are our state parks?

No, the parks aren’t going anywhere, but they are changing and we’re likely only seeing the first glimpses of those changes. To paint the picture of where the parks are going our staff talked to dozens of state officials, current and retired park staff members, Friends groups, trail users, hunters, volunteers and park leaders from around the country.

Jim Lundstrom reminds us of John Nolen’s original vision for the park system while Patty Williamson takes us back to the 1930s to introduce us to the Civilian Conservation Corps, who built so much of the infrastructure our parks stand on today.

We’ve included short histories on the founding of each park, vital information, and a timeline of important events. We think you’ll love the artwork for each park created by Creative Director Ryan Miller.

Alyssa Skiba tells us how the role of Friends groups is changing, and how the organization is adapting to increasing demands. Jackson Parr digs deep into alternative funding scenarios with a look at how park systems across the country are funded, and what Wisconsin is considering doing to shore up its budget. We also take a look at the challenges the parks face and how recent changes are impacting users of all stripes.

Of course, you’ll also find information about our revamped online local producers guide, Earth Week events in Door and Kewaunee counties, and a guide to the farmers markets that will soon be in full force up and down the peninsula.

We hope you come away from this issue with a better understanding of the state of our parks, and appreciation for how important they are to our community. Thank you for reading.