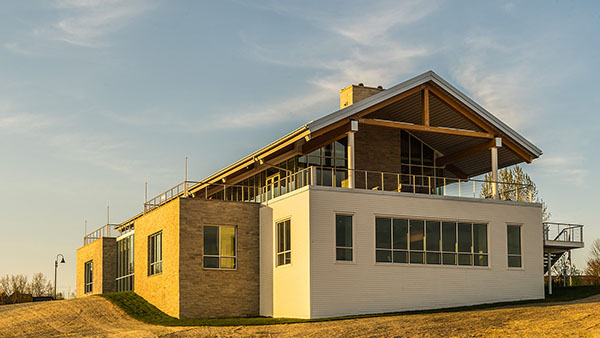 The design of the Donald and Carol Kress Pavilion evokes the look of the Thordarson Boathouse on Rock Island. Photo by Len Villano.

Each year we get hundreds of letters to the editor submitted to our desks at the Pulse, but only a handful stand out from the stacks. This year none struck us more than this one from Tom Torinus about Egg Harbor’s Kress Pavilion. At a time when so many leaders and citizens would rather stubbornly defend a lie or mistake to their last breath, this letter reminds us how easy – and effective – it can be to simply admit you were wrong. Thanks, Tom.

Last year as I heard about unfolding plans for the new Egg Harbor Library and Pavilion, I had a ready judgment for just about everything I heard, and my judgments were much smaller than the vision which was being created by city leaders and donors.

Why shut down and remove a going business to get a site when there was plenty of empty land around? Why build such a large building when there are only a few hundred residents in Egg Harbor, with larger county libraries easily available? And tourists don’t use libraries, do they?

Wasn’t the scale out of proportion with other village buildings? How could the local government go into the events business in competition with private enterprises that host such events? Isn’t it going to cost a fortune to heat and cool the building with all that glass?

When the library opened this spring, I was amazed. It is spectacular.

Its scope is dazzling and daring with all that glass at both levels. It’s the perfect site. The design is elegant, if contemporary and spare.

Architectural materials are very fine, detailing distinctive and even elegant. Large and gracious free-standing fireplaces. Tasteful furnishings in lounging spaces. Side rooms and meeting nooks downstairs can be used by many groups for many purposes.

The top floor astounds with its panoramic views to west, south and east. Great outdoor balconies with pretty red furniture for contemplating these views. Elaborate optical and audio screens. It is a great gathering space for the whole county.

I simply want to say thanks to Don and Carol Kress, to village leaders who worked hard with them to shape this vision, to the architects and builders, to all who contributed. It is a rare thing now for government at any level to do a bold, exciting, creative thing; public architecture has suffered mightily in recent decades. Yet Egg Harbor has this soaring building at its center that will set a high tone of excellence for future development.

And once more I get to say “I was wrong,” which I find I must do often these days as I stumble toward humility.