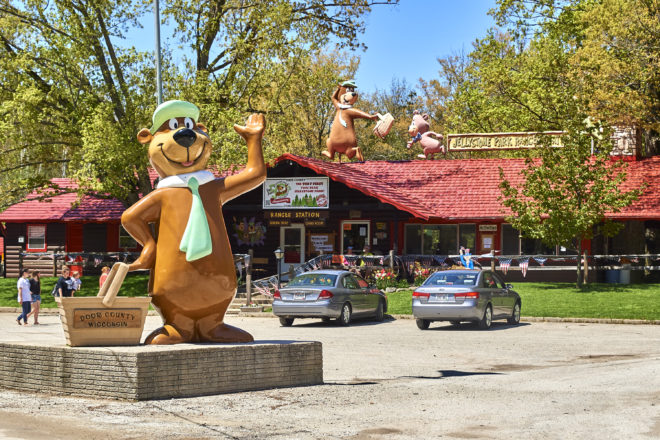 It’s a sunny and unusually warm Saturday of Memorial Day weekend, and Jellystone Park in southern Door County is hopping.

The pool is filled with gleeful children and rimmed by parents in lounge chairs, chatting and soaking up the welcome sun. People are still rolling in for their camping spots, but seasonal campers are already well settled in. Campfires burn, and the fragrant smoke moves lazily through the thick, early-summer air.

The 50th-anniversary season of Yogi Bear’s Jellystone Park has begun!

There are 85 Jellystone Parks in 30 states and three Canadian provinces, but their story began here in Door County a half-century ago at the campground just south of Sturgeon Bay.

The concept was the brainchild of Doug Haag, who owned an advertising firm in Manitowoc and had built a retreat for his family on Sand Bay in Nasewaupee.

Spending time at Sand Bay with his wife and three kids, Haag got the itch to open a national chain of campgrounds that would appeal to the whole family. But it had to be more than a campground, he thought. It also had to be entertaining, with activities and a vibe to appeal to all ages.

But how to tie it all together into a franchisable package?

Haag’s marketing/advertising skill sets kicked in one day when his kids were watching Yogi Bear cartoons on television. Yogi was a very popular bear, and he lived at Jellystone National Park. Bingo!

Now all Haag had to do was convince Yogi Bear creators Hanna-Barbera that the idea was sound enough for them to agree to a licensing agreement.

When he met with executives in New York City who would make the decision, they told him they had approved a campground idea proposed to them featuring one of their other popular cartoons, The Flintstones, and it had flopped. No wonder, Haag said, because the Flintstones are not about camping, and Yogi Bear is.

“Hmmm,” the executives said collectively. “He’s right.” And they made a deal for 6 percent of all gross sales at each park in exchange for Haag using the name and images of Yogi and his cartoon colleagues at the park.

“Our neighbor across the street remembers a line of people waiting to come in,” said Jill Kavicky, who has owned the original Yogi Bear’s Jellystone Park with husband Jim since January 2002.

She was a kid herself when she first visited the children’s wonderland of Jellystone Park with her grandparents and parents shortly after the park opened. Swimming pools, multiple playgrounds and organized activities supervised by park “rangers” keep the children occupied.

“Now our children, including our granddaughter, have a seasonal campsite here at the park,” she said.

Jill and Jim Kavicky live in and grew up in the Chicago suburbs.

“We went to high school together,” Jill said.

After they were married and had a family of their own, they would vacation in Door County and get day passes to the park so the kids could swim in the pool.

“They loved it; he loved it; so we started camping here every year,” she said. “We were coming here all the time. Then it was for sale one year. The next year, it was still for sale. The third year, we said, ‘OK, we can do this. We’re ready.’”

“We definitely took a leap of faith,” Jim said.

“What are the odds here?” Jim said. “Two people from Illinois, 240 miles away. Anything could happen. We’re not here all winter.”

Jill added with a smile in her voice, “We got it on a handshake.”

After 17 years of ownership, the Kavickys are proud of faithfully carrying on Doug Haag’s original vision of family friendliness.

Campsites are available for tents, travel trailers and large motor homes. Many of the motor home campers take advantage of seasonal rates, which allows them to arrange the site to suit their needs — which might mean adding a deck or garden.

For the camping equipment-impoverished, there are fully furnished cabins and rental trailers available.

Taking a walk through the park with the Kavickys, campers wave. Jim and Jill call out to them by name. Some stop to chat, such as a mother and son. The boy has a watermelon freeze pop. As Jim talks to him, a piece of the freeze pop can’t take the heat and falls to the ground. In a small but very nice gesture, the Kavickys tell the mother to stop at the Ranger Station (the park’s headquarters, which includes a store selling souvenirs and goodies) for a slushee as a replacement.

Janet Ebert of Algoma also speaks of the family-friendly environment.

“We started coming here in the late ’70s,” she said. “At first it was just for the weekends. Then we’d go for a week. As time went on, we got to go for the summer. Jim would let us keep the camper on for the summer and move it in the fall. We had the opportunity on a site we liked to be a seasonal, so we took that.”

That is Site 1, the very first site when you enter the grounds.

“My daughter and her husband are in Site 2, and my son and his wife are in Site 3. So the whole family is together,” Janet said, adding, “My daughter was five when we started coming, and she’s 46 now.”

But here’s the real magic to that story: “My daughter [Tammy] met her husband [David Tlachac] here at a Saturday-night dance. She was 15, and he was 16.”

Janet’s husband, Harold “Butch” Ebert, died in April 2018. He and Janet had promised each other that when one of them died, they would continue the family tradition of camping at Jellystone.

“It’s the atmosphere, the familiness, the friendly people,” Janet said. “It’s really nice. And the owners are so nice and friendly. They’ll do anything to accommodate you. They’re family-oriented, too. Always a smile, always time to stop and talk to you.”

Chet and Chris Wojcik of Green Bay have camped at four different locations within the park during their decades of visiting Jellystone, but they are 16 years in their current shady-pine sweet spot.

“I’m very grateful to have this spot,” Chet said.

Throughout the campground, seasonal residents have added decks, gardens, water features and other elements that give a personal stamp to the sites. The Wojciks’ site in particular is like walking into someone’s backyard. The space is cozy and homey, lined with comfortable outdoor seating and filled with sweet birdsong and the heady aroma of a campfire.

But Chris points out, “The park has strict rules about not changing the natural growth of things, and that’s what makes all the sites look so nice.”

“That’s my pride and joy over there,” Chet said, referring to a massive and orderly collection of firewood.

“I told them that you have an eternal flame here,” Jill said.

“He throws it in the by the armload,” said Jill’s daughter, Katie Kavicky-Mels.

The couple has been camping at Jellystone for 38 years.

“Our son’s camp is next door to us, with his kids, so there are three generations here,” Chet said.

They first visited Jellystone for a weekend to try it out.

“Then we went to another campground another weekend,” Chet said. “It was a bad experience, so we came back here and have been coming ever since.”

After running their mobile home back and forth from Green Bay to Jellystone, they realized it would be cheaper to become seasonal residents and park their unit at the campground year-round.

“She retired last year,” Chet said. “We would be two, three days a week in Green Bay and the rest up here. Now this year, we go back to Green Bay for a couple days.”

With both of them retired, the Wojciks decided last year that it was time to really get comfortable at Jellystone with a new mobile home.

“We were waiting until we both retired. This was our gift to us,” Chris said, and they had something very specific in mind.

“We just knew it was a trailer built just for us, not for grandkids,” Chris said. “We knew we wanted certain things, certain floor plans, a big bedroom, big living area, full-size refrigerator and stove. Lots of glass in the front. We spotted this one on the lot a year ago, in the fall. Chet saw it first. He said, ‘You’ve gotta see this trailer. I think it’s the one.’ It was the one. It’s very comfortable.”

Suggesting that it sounds like Jellystone is a home away from home, Chris said, “That’s the way we see it.”

Park founder Doug Haag died on Memorial Day of 2018, but family members will be in attendance when the 50th anniversary of the park’s opening is celebrated June 28 – 30. Learn more at doorcountyjellystone. com.

Who Is Yogi Bear?

That is a question people of a certain age can easily answer. He’s a smarter-than-the-average-bear who, along with his pal Boo-Boo Bear, enjoys purloining pic-a-nic baskets from human campers at Jellystone National Park.

Yogi wears a porkpie hat and talks in a distinctive voice that people of another certain age will recognize as a reasonable facsimile of the voice of Art Carney portraying his sewer-worker character Ed Norton in the mid-1950s TV comedy series The Honeymooners. (The Flintstones cartoon series was, basically, The Honeymooners set in a much different era.)

Yogi was born in 1958 as a supporting character in the Hanna-Barbera cartoon series The Huckleberry Hound Show. Yogi proved so popular that he was given his own series, The Yogi Bear Show, which ran in 1961 – 62. In 1964, he starred in the animated feature Hey There, It’s Yogi Bear!

In 1966, Yogi made a comedy album called Yogi Bear and the Three Stooges Meet the Mad, Mad, Mad Dr. No.

There were also more than a dozen made-for-TV features through the late ’90s, as well as a revival of the original ’60s series on the Cartoon Network. In 2010, Dan Aykroyd — who’s one of those people of a certain age — voiced Yogi in the 2010 live-action/animated feature Yogi Bear.

A myth promoted even after the death of baseball Hall of Famer Yogi Berra at the age of 90 in 2015 had him the suing Hanna-Barbera for infringing on his well-known name with the larcenous cartoon bear. But as Berra told a newspaper in 1963, “Television is big enough for both me and Yogi Bear. I was going to sue the Yogi Bear program for using my name until somebody reminded me Yogi isn’t my real name — it’s Lawrence.”