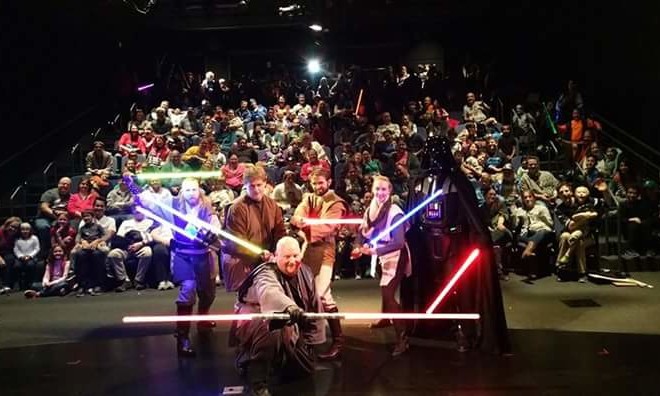 The 501st Legion took part in a performance at Family Sci-Fi Day at Discovery World on Oct. 17. Submitted.

Until the release of Star Wars: The Force Awakens in theaters this weekend, most fans of the epic space opera franchise have had to get their fix by watching (and re-watching) the first six installments and awaiting release of the newest film’s trailers. But for Dan Christy, of Algoma, his Star Wars fix is regularly met in proper George Lucas style with requests from nonprofit organizations throughout Wisconsin.

Those requests are made through the two Star Wars costuming organizations Christy has been a member of for the past few years: the 501st Legion and the Rebel Legion.

While these groups are split between “the good guys and bad guys” of the franchise, their missions are all good: creating a community of Star Wars costume enthusiasts to share their costume talents, promoting an interest in George Lucas’ modern mythology, and putting their resources to good use through works of charity and volunteerism. 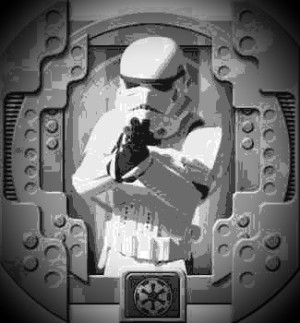 But these aren’t just costumes scrounged together from thrift store finds – these costumes are the result of “careful research, fabrication and a lot of hard work,” as the 501st Legion website boasts. A majority of the costume components are hand built and “all of the costumes have to be movie accurate,” Christy explained. “There are levels of things that you need to meet in order to meet that criteria.”

It wasn’t difficult for Christy to be accepted into the organizations. After all, he had experience making costumes with his aunt, who was a member of the Society of Creative Anachronisms, an international organization dedicated to studying and recreating Medieval European cultures and costumes. This was the same aunt who introduced him to Star Wars.

“It just became one of those things that instantaneously spoke to me,” he said of the franchise. “I remember the first time I saw The Empire Strikes Back at three years old and just being like, ‘Wow! This is amazing!’ And then I was old enough to see Return of the Jedi in theaters and then it started building from there. Once I got on Facebook, I found all these other people who also love Star Wars so we all started connecting that way and then finding out about the Rebel Legion and connecting with people that way…for every person you meet, another door opens.”

Inspiration for his first costume struck after seeing the prequel trilogy (The Phantom Menace, Attack of the Clones and Revenge of the Sith) and having the right materials at hand.

“The first one was a Jedi costume so I had the light saber, the Jedi belt and I did a Corellian Jedi, which in the expanded universe was a Jedi that lived on Corellia where Hans Solo was from,” Christy explained. “They were kind of like a separate sect of the Jedi Order and they had families and family was very important to their Jedi understanding so it was kind of an offshoot plus with the fact that I was married with a child, it kind of spoke to me a little bit.”

His second costume was of an Imperial Stormtrooper made with ABS molded plastic that had to be trimmed, molded and cut to fit his body. He has also created non-Star Wars character costumes, including David Tennant’s Tenth Doctor, a character from the BBC sci-fi television show Doctor Who, as well as the Marvel Comics character Deadpool. 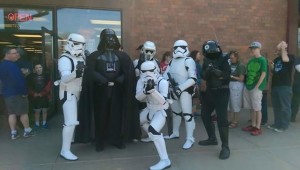 “I’m currently working on an Obi-Wan Kenobi in Mandalorian armor costume,” Christy said. “…It’s a long road ahead and if things go well, it should hopefully be finished by the summer of next year.”

In the meantime, Christy regularly puts his Jedi or Stormtrooper costumes to use at charity events throughout the state. The organizations do not charge a fee for public or private appearances, asking instead that individuals make a donation to a charitable organization in the Legion’s name.

When a group expresses interest in having one of the Legions present for an event, members receive an invitation and if they can attend, they do.

“It all depends on how much real life gets in the way,” Christy laughed. “…This year, between the Rebel Legion and the 501st, I’ve done about 15 different events and I know there are people who do far more than that. Every year we have a big event in Milwaukee at Discovery World. This year was a sci-fi one, so we included the Wisconsin Ghostbusters, we had the Wisconsin Heroes Alliance there and they do superheroes like Batman, Superman, Wonder Woman, and then we had the 501st and Rebel Legions there.

“At Discovery World, we actually have a light saber duel that we do and we raised over $2,000 for Make-A-Wish,” Christy added.

In 2013 (the most recent figures available on the website), the 501st Legion raised $262,328 and donated more than 28,946 volunteer hours in its fundraising efforts for dozens of charitable organizations, from the American Cancer Society to March of Dimes to children’s hospitals.

“When you see a kid’s face light up, it’s the most amazing and compelling thing that one can see,” Christy said. “When you see a child who is maybe dealing with something that’s traumatic and possibly life-threatening, you can make them, just for a little bit, kind of forget about where they are and get lost in that world of imagination. It makes you feel good, it makes them feel good, and it helps kind of make the world a better place.”