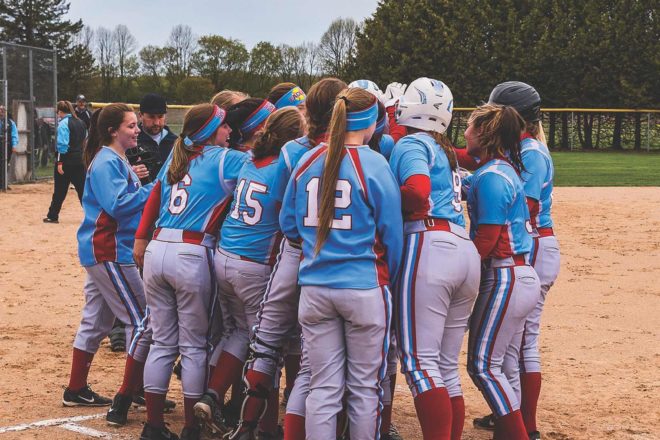 In 2019 the Southern Door girls softball team went to state. They hoped for a return shot at a title this spring. Photo by Len Villano.

A legitimate chance at a state title. A chance at redemption. An opportunity to break a school record. A return trip to state competition. An appreciation for great experiences.

For many local senior athletes, the cancellation of spring sports means lost opportunities to end careers at the highest levels.

“Of course as a coach, to hear the entire season [is] being canceled is heartbreaking. I think about my seniors missing out on a lot of lasts,” said Southern Door softball coach Courtney Renard, whose team made the Division 3 state tournament last year. “They have put in four years of dedication to the program and to the school, and then in a blink of an eye, their senior year of softball was over before it even began.”

Sevastopol senior Mya Ploor said she had been training hard for a return to the Division 3 girls state track meet after teaming up with fellow senior Lizzy Fiscus, Olivia Stenzel and Zoe Kuehn to place second in the 3,200-meter relay. The Pioneers finished behind Auburndale with a time of 10:00.91 and shaved 22 seconds off their sectional time.

“Knowing that we all were returning, we had our goals set high,” Ploor said. “It was also a goal of ours to go after the school record, and we had it figured out how much time each of us was going to drop to get it.”

Southern Door senior infielder Kendi Dantoin said she had been looking forward to redemption following a disappointing performance in the Division 3 softball state tournament in a 3-0 loss to Campbellsport. Dantoin missed a home run that was a foot left of the left-field foul pole that would have tied the score at 2-2 in the fourth inning.

“Campbellsport was a great team, but I think that if we would have played to our full potential, it would have been a different game,” said Dantoin, who had been looking forward to finishing out her career with fellow seniors Taylor Watters, Jackie Atkins and Kylie Neinas. “We talked about it after the game, and most of us agreed that the feeling we felt after losing was the motivation we needed to come back this year showing our full potential.”

Gibraltar’s Abbi Sitte, a standout in both volleyball and basketball, had been working toward returning to the state track meet and breaking the 100-meter-dash record time of 12.72, which Debbie Kordan set in 1982. Sitte ran a personal-record 12.89 in a ninth-place finish at last year’s Division 3 state meet.

“I was in denial. I didn’t want to believe that it was all just over like that,” Sitte said. “It’s still hard to accept it.”

“Even though I went to state last year, I was really excited to try again and do better this year,” she said.

Sevastopol’s Kiegan Sargent decided to put a positive spin on WIAA’s mandate. A two-time state qualifier in track, Sargent placed sixth in the Division 3 meet with a leap of 21-5 and 13th as a sophomore in 2018. Sargent was also hoping to break Bryan Kuehn’s school-record jump of 22-7.

“My initial reaction was obviously a bit of heartbreak,” Sargent said. “But with time, you get to think a lot about it. I’m blessed enough to have made it to state twice and even make the podium.”

Southern Door Athletic Director Korey Mallien shared the disappointment of the senior athletes and added a message for the juniors and underclassmen who will have an opportunity to participate in sports during the coming school year.

“Like everyone else who is involved in high school athletics, I’m really sorry that they don’t have a chance to play this spring,” Mallien said. “To all underclassmen: I hope that they can take notice that their opportunities to play prep sports can be cut painfully short at any time.”

There certainly are many other athletes in Door County who deserve mention.

The Sturgeon Bay baseball team returned five seniors from a team that finished 21-8 last year and lost to Ozaukee in the sectional final. First-team All-Packerland Conference pitcher Jake Schneider – also a basketball standout for the Clippers – was returning after leading the Clippers to consecutive conference co-championships.

Riechers isn’t the only Sturgeon Bay senior girls track athlete returning from the 2019 Packerland Conference champions. Hailey DeGrave was poised to make the sectional meet in the 800-meter run after missing last year’s sectional meet by one place. Delaney Shortreed returned after finishing fifth in the shot put at the Packerland Conference meet. Kasia Klotz was a returning member of the sectional-qualifying 400-meter relay team.

“Seniors have been robbed of so many lasting memories,” Sturgeon Bay Coach Mike LeRoy said. “It includes being the influential leaders they have turned out to be.”

According to Sturgeon Bay Assistant Coach John Rosenthal, hurdlers D.J. Lenius and Fletcher Hubbard are state-meet-quality athletes. Evian Torres (1,600 and 3,200) and CJ Fairchild (jumps and sprints) would have been counted on to score valuable points in the distance races, and David Condra was an integral member of the distance relays.

“I know how much track means to a lot of my classmates, and I couldn’t imagine the heartbreak they feel,” said Benzinger, who teamed with Lenius, Burk, Dietzel, Hubbard and Fairchild to win the Division 4 soccer state championship in November. “I know if soccer got canceled, I wouldn’t know what to do, especially with the big expectations that we had to succeed and make it all the way. It’s similar to some of the track athletes. Sports are one of the most fun and meaningful times in high school, and it’s something we will never get back.”

Madison Starr was poised to be the leading scorer for the Sturgeon Bay girls soccer team for the third consecutive season. Captain Georgia Feldman is a leader by example, according to Coach Bob Desotelle, and Claire Tellstrom, Gracen Spritka and Alexis Ruiz would have been important parts of the Clippers’ run to a third-straight Packerland Conference title.

Sevastopol softball coach Brooke Lauritzen said she was counting on seniors Lauren Junion and Alison Daubner to be strong contenders for All-Conference honors.

Ploor offered an upbeat and inspirational summation of the lost season, coupled with her venture into remote learning. She’s headed to Luther College in Decorah, Iowa, to major in music education and music performance.

“This is probably the best way to prepare for college, as we have a new kind of independence and responsibility that is all on us now and not the teachers – like in college,” Ploor said. “So, while I sure didn’t see this coming for my senior year, I can’t say that it has ruined it by any means. It definitely has made it a year I won’t forget.”