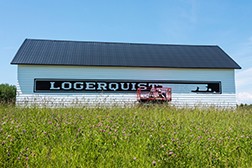 Tom Lutsey and Rick Brawner repaint the Logerquist sign on the 1889-vintage barn in Jacksonport.

Tom Lutsey is hoping to solve a mystery he and artist Rick Brawner uncovered while repainting the Logerquist sign on the 1889-vintage barn in Jacksonport.

During the process, they discovered what appeared to be a painted-over symbol in front of the letter. 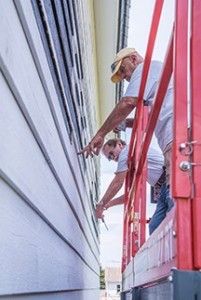 Lutsey is hoping someone has an old photograph showing the original Logerquist barn sign with the logo.

Lutsey said as he and Brawner were working on the barn, people would stop and ask what they were going to write on the side of the barn.

“People are happy to see that we kept it Logerquist,” Lutsey said. “I think it was the right thing to do. I think a big part of why we did it, we wanted Althea, Benny Logerquist’s wife, to see it. Benny was a friend of all of ours. We wanted to do it for Benny, but Benny passed (on Nov. 29, 2014) before we could get to it.”

For the replication of the sign, the pair used a photograph on display in the Sturgeon Bay municipal building.

“It was fortunate I had a real artist with me. That made it a little easier,” Lutsey said. “He did the curved parts and I did a lot of the straight parts. It is really a symmetric design. We also found that they had made grooves where the painting was in spots, some kind of etching tool was used for a straight line. We just had a ball.”

If you have an old photo with the Logerquist logo, contact Lutsey at [email protected].