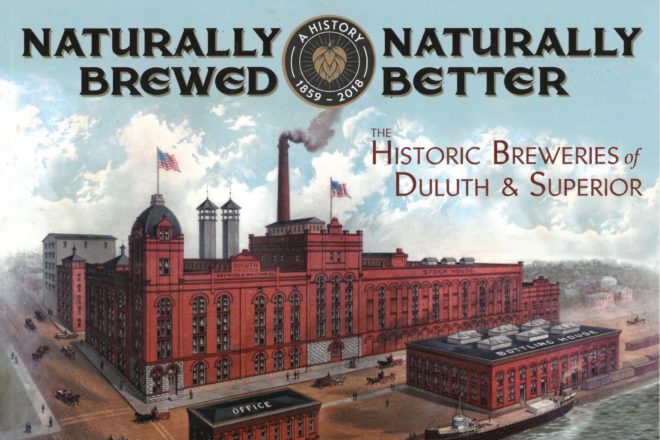 “It was a fun book to put together. A lot of work but fun at the same time, which is rare. Usually it’s just a lot of work,” he said.

Dierckins is a native of St. Paul who first arrived in Duluth in 1984 to attend the University of Minnesota-Duluth. He moved away, returned for grad school, moved away again, and then returned to establish Zenith City Press.

He took his first dip in the city’s beery history when the owners of the building that had housed Duluth’s last regional brewery – Fitger’s – wanted a history written about the complex, which now houses a variety of businesses, including Fitger’s Brewhouse. When the man who was hired to write that history died, Dierckins and his copy editor finished the project.

“I learned a lot and it whet my appetite,” he said.

He returned briefly to Duluth brewing history in the 2012 book Lost Duluth.

That led him to do more brewing research, which led to a breweriana collector extraordinaire.

“Everybody kept saying, ‘You’ve got to talk to Pete,’ ” Dierckins said.

So Dierckins met with Pete Clure, who not only collects brewing memorabilia, but his day job is as a sales rep for a Duluth beer distributor.

“I found that Pete not only has a great collection, but great knowledge as well,” Dierckins said. “He became an invaluable resource as well, so much so that he’s essentially the co-author.”

In his pursuit of history, Dierckins has found that what has been passed down as historic truth is not always fact.

“People think history is set in stone, but it’s a moving target and open to interpretation,” Dierckins said.

For example, Duluth’s first brewer, John Gottlieb Busch, had always been identified as a German brewer who immigrated to this country, when in fact he was a cooper – a barrel maker – which led Dierckins to the conclusion that, “If you were a German immigrant in the U.S. between 1820 and 1890, and once walked past a brewery, that pretty much qualified you as a brewer.”

Dierckins was also able to correct the long-held notion that Duluth brewer August Fitger was from Milwaukee.

“It turns out he came from St. Louis,” he said.

Dierckins’ favorite story uncovered during research for the book was about Fritz and Mathilde Anneke, the parents of Fitger’s Brewery co-founder Percy Anneke.

“His parents were German revolutionaries that personally hung out with Karl Marx while he was writing the Communist Manifesto,” Dierckins said. “Susan B. Anthony credits Mathilde Annecke for turning her into a suffragette.”

He also expressed a fondness for the stories regarding one of the worst social experiments ever attempted in this country – Prohibition.

“I love the stories of the breweries trying to survive Prohibition,” he said. “No matter what, it’s always about people. It’s the story of the people who built the breweries and worked in them.”

The book is beautifully illustrated with historic photos, beer labels and brewing memorabilia.

As a Duluth native, one of my favorite photos in the collection shows longtime Duluth weatherman Jack McKenna and a WDIO-TV sportscaster I don’t recognize (never was a sports fan) sitting on cases of Fitger’s, holding a full glass of beer in their hands. McKenna earned a place in my memory for his portrayal of Captain Fantastic, presenting horror and sci-fi flicks on late-night television in Duluth.

Even if you have no connection to Duluth, the modern version of which is earning a reputation as a craft beer destination, this look at brewing from 1859 to 2018 is a fascinating slice of history.

For more information on Naturally Brewed, Naturally Better, or to order, visit zenithcity.com. It is being sold online at a 20 percent discount through Dec. 26.