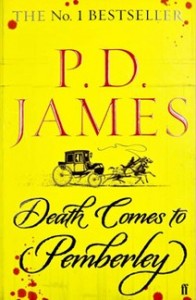 Fans of Jane Austen, and maybe even those who have been asked to read Pride and Prejudice in school and watched the movie, will enjoy PD James’ mystery sequal Death Comes to Pemberley.

Pemberley is, of course, the impressive estate of Fitzwilliam Darcy, the romantic hero whom Elizabeth Bennet marries once the couple has overcome their issues of pride and prejudice.

James’ story begins in 1803, six years after the happy resolution of Pride and Prejudice. Darcy and Elizabeth are comfortably married and living at Pemberley with their two young sons, when a murder occurs on their property. The prime suspect is none other than George Wickham, the handsome but dissipated fortune-hunting young lieutenant who courted Elizabeth in the early pages of Austen’s novel. Elizabeth dodged that bullet of marriage, but not her headstrong and foolish sister, Lydia, creating an embarrassing family connection.

Most of Austen’s delightful Pride and Prejudice characters are resurrected by the pen of PD James, including the loveable Mr. Bennet and his annoying wife; the unctuous Mr. Collins; and the outrageous Lady Catherine de Bourgh. A prologue provides background for those who have forgotten the plot, never finished the assigned novel, or are fans of PD James rather than Jane Austen.

And while James showcases her skill as a whodunit author, offering up a bloody corpse in the woods and titillating readers with a tangle of clues and red herrings, she also amuses her readers with her gentle imitation of the language, dialog, and plot conventions of nineteenth-century novels:

“Captain Denny lay on his back, his right eye caked with blood, his left, glazed, fixed unseeing on the distant moon. Wickham was kneeling over him, his hands bloody, his own face a splattered mask. His voice was harsh and gutteral but the words were clear. ‘He’s dead! Oh God, Denny’s dead! He was my friend, my only friend, and I’ve killed him! I’ve killed him! It’s my fault!’

“Before they could reply, he slumped forward and began a wild sobbing which tore at his throat, then collapsed over Denny’s body, the two bloody faces almost touching.

“The colonel bent over Wickham, then straightened up. He said, ‘He’s drunk.’

“‘Dead. No, better not touch him. I know death when I see it. Let us get the body onto the stretcher and I’ll help carry it. Alveston, you are probably the strongest among us, can you support Wickham back to the chaise?’”

But for some readers, her parody will be both a delight and an irritation. The stiffness of non-colloquial dialog can become off-putting, and the leisurely unraveling of unforeseen relationships can become tedious to modern readers accustomed to fast-paced fiction. But because Death Comes to Pemberley is a quick read, these shortcomings are minimized.

The novel imitates rather than satirizes Austen’s style; any resultant humor from this fact is subtle. In an author’s note James writes, “I owe an apology to the shade of Jane Austen for involving her beloved Elizabeth in the trauma of a murder investigation,” and then adds, “No doubt she would have replied to my apology by saying that, had she wished to dwell on such odious subjects, she would have written this story herself and done it better.”