On July 2 at 8 pm, Pokey LaFarge will bring his unique brand of old-timey “riverboat soul” to Door Community Auditorium (DCA). With a style that’s both ragged and polished, LaFarge is a songwriter, bandleader, innovator, and preservationist whose arsenal of talents has placed him at the forefront of old-time American music. 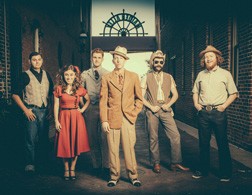 Over the last decade, LaFarge has endeared himself to music lovers across the globe with his lively mix of early jazz, string ragtime, country blues, and western swing music. Born in the American heartland and now based in St. Louis, Missouri, LaFarge has a Midwestern charisma that draws audiences in.

In the past, LaFarge has played with the likes of Jack White, The Raconteurs, Wanda Jackson, Old Crow Medicine Show, and the Carolina Chocolate Drops. 2014 looks to be LaFarge’s most momentous year yet, with a tour trail consisting of more than 250 shows that includes appearances at clubs and festivals across the USA and Canada, as well as two extensive tours in Europe.