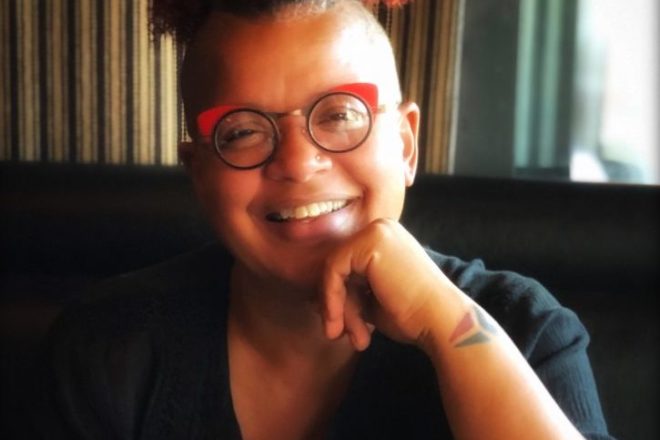 Faith Adiele turns truth into art – her truth, her stories. She tells of growing up American with Nordic and Nigerian heritage, traveling to Thailand and becoming its first Black Buddhist nun, dealing with a diagnosis of fibroids while pursuing her graduate degree in Iowa, and trekking across the mountains of Lesotho in South Africa with a group of students.

Adiele has written two memoirs, appeared in myriad anthologies and journals, made a documentary, and worked in collaboration with HBO’s Calm to help thousands of people find some peace during these crazy times. She’s an educator, mentor and speaker – basically, an astounding human being. Adiele likes to push boundaries, imbues her writing and conversation with humor and depth, loves a good true story and wants to help more voices be heard.

She is this year’s judge for the nonfiction category of the Hal Prize, and she spoke with me about becoming a writer, what it was like to hear Idris Elba read her story and why we need to reexamine our culture’s rules for writing.

Sally Collins (SC): Off the bat, what drew you to writing?

Faith Adiele (FA): I was raised by a family of storytellers. My grandfather, who was Swedish, told tall tales; my Finnish grandmother was very artistic, doing little art projects, analyzing the people around us; and because they were immigrants, talking about the people they left behind. My mother was an insane bookworm – still is – and is always reading about different cultures.

Straightaway from college, I learned the importance of narrative when I was doing social-justice and community work. We were an international, multicultural group, and we used narrative to make big choices and decide what political structure we were going to upend.

I realized that narratives show how we function in the world. I love that it makes conversations. I want to get new voices into literature, learn about those who are not seen.

I went to graduate school at 35 after I realized I had these stories to tell, and I wanted to devote myself to telling the stories correctly, to learning the tools.

SC: You have a plethora of experiences to draw inspiration from. Is it difficult to put these stories into words, or does it come easily?

FA: Nonfiction comes easy. The tough part is that I always want to reinvent the structure. I want to tell complex stories. Everything feels that it needs to be told from the Nigerian, American, Nordic perspective, the historical element. So I don’t see a linear narrative – I’m multiracial, multicultural.

The first story I presented in grad school, the other students were like, “What!?” It was called “Black Man,” and it was about Finnish men with really long names. The others were like, “What are these names? There are no Black men in here?” Thank God I was 35 and was pretty clear what I wanted to do.

I realize now when it doesn’t make sense, I’m not breaking rules effectively enough yet. Western literature makes assumptions – it’s linear, black and white. But we need to use new tools so more is represented.

Things are cyclical; time overlaps; multiple realities exist. When you go with nonfiction, the art is trying to figure out the metaphor with real life. Fiction feels like cheating. I love the challenge.

SC: It can be scary to draw from real life. I saw you teach a class called How to Write a Memoir and Still be Invited to Family Thanksgiving.

FA: Yes. Initially memoirs seem seductive: “I’ll just write about my life and pass it on, and it will be lovely.” And then you get going and are like, “Uh oh.” Your story is connected to everyone else. The reality is that you have to deal with that.

SC: What’s it like to hear your stories read by Idris Elba, Kate Winslet and Marisha Ali?

FA: It’s super trippy. For HBO’s Calm, I was writing to images. For the Sleep Story, I actually took that trip. I had to tone it down a bit – “edit for sleepiness,” as my editor put it. I’m a travel writer; stuff is supposed to happen.

It’s incredibly exciting and kind of weird hearing Idris voice my story in the first person. It’s about a trip I took with students in Africa, and I was like, “If I’m gonna write about Africa, there are tropes I’m going to try to avoid.”

It feels like a lot of stories from Africa are about safari animals or trauma. People don’t know a lot of the continent, so it was important for me to add things like cultural values, proper names. Some travel writers are irresponsible. I want to show respect and humanity for the places I visit.

SC: What is your writing process?

FA: I’m not disciplined at all. I’m a binge writer. I don’t have that daily practice, so I’m storing up all these things.

I have a writing partner. One day a week we get together, and we write from 10 am to 4 pm. We are also in a writing group made up of four women of color finishing manuscripts.

I’m always submitting short pieces to editors, but if I’m writing anything toward a book, I need to go on a retreat so I can think things through. At home I’m a wife, a teacher, a community member. So I tend to write smaller stuff when I’m being a civilian.

I’m very wary of the advice we have inherited when it comes to a writing practice. The “classics” are from privileged white men with wives and servants. It feels like we have to write with a beautiful view, have a special chair, do it by hand every day.

Don’t get caught in the trappings – that is based in privilege. There are plenty of single moms who did it at the kitchen table with a crayon at 4 am, or my friend who wrote his book waiting for trains and in line at Starbucks. Do what works best for you and the story.

SC: What joy do you derive from teaching?

FA: I love teaching so much. It’s so funny – I avoided it for so long because both my parents are teachers.

So many of my writing exercises I learned from doing social-justice work. People are finally questioning the workshop model. The reason I love teaching nonfiction is that everybody has a fantastic true story. I have the tools to help you craft it into something effective. You will end up a better world citizen if you write and read nonfiction. I love being a steward of that.

SC: Any advice for those considering submitting their work?

FA: Get eyes on it! First, we love the thing we write, and later we go back and say, “Oh, my God, what was I thinking?” Then you go back and love it again.

Read it out loud, as if you were performing it. That will make you see where the issues are. Be clear who you are trying to reach and what you are trying to say. I want to see passion. It doesn’t have to be perfect. You don’t have to bleed on the page. But think of the person you want to read this and write for them.