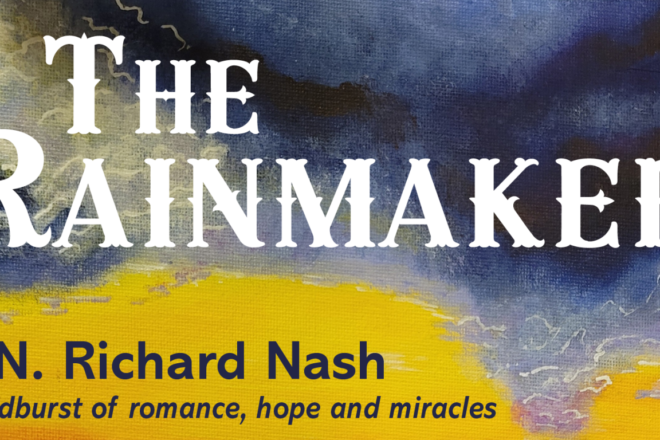 As a story about family and working through the restrictions we place on ourselves, N. Richard Nash’s The Rainmaker is as lightheartedly charming as it is poignant and sincere. Offering both pin-drop silences and easy laughter, it refuses to be either a happy-go-lucky cliché or a never-ending storm cloud.

The Rainmaker debuted on Broadway in 1954 but was set in the Dust Bowl of the 1930s. It follows the Curry family – father H.C. and his grown children, Lizzie, Noah and Jim – as they work their cattle ranch. Lizzie wants to get married just as much as she needs to, but pride and insecurities cause her to dodge any attempts at finding a husband.

After the young deputy in town, File, doesn’t come to supper in a thinly veiled attempt by her father and Jim to get File and Lizzie together, she’s convinced she will never find a mate – until, that is, the charming Starbuck swings by the house and promises to bring rain to the Currys’ drought-stricken ranch.

Ayanna Bria Bakari, portraying Lizzie, is so real it nearly hurts. Honest, insecure, serious and joyful, she argues with her brothers as much as she flounces around in her attempt at playing the town flirt. Her genuine personality is as modern as it is 70 years old.

She’s a real sister in a real family with real problems. Noah, played by Kai A. Ealy, is a strict older brother who’s running the struggling ranch. Her brother Jim, played by Xavier Edward King, is pulled between love and Noah’s wishes. And H.C., portrayed by Sean Blake, is a single father who just wants what’s best for his children.

There are no flat characters. Running from a heartbroken past, File, played by Ryan Hallahan, refuses to connect with anyone, including the helpful, well-meaning sheriff, portrayed by Greg Vinkler.
And even Sean Fortunato’s Starbuck, with his easygoing attitude and gold-tipped boots, uses the impossible and fantastic to hide his dislike for the world.

In two acts that each run a little under an hour, the setting is easy to believe, and the dialogue plays like real, imperfect conversations and laugh-out-loud sibling sass. Linda Fortunato’s artistic directorial debut soars on the fact that The Rainmaker doesn’t feel directed.

The costume design brushes characteristics across clothes. Stringent Noah wears khakis while the rest of his family wears blue jeans. Starbuck’s purple accents are as whimsical as his nature. And the brightest color on stage is Lizzie’s pink head scarf, which keeps more than just her hair hidden away.

Aided by lighting, the stationary set fits the Currys’ world into three rooms. The blue backlighting keeps the promise of rain ever present between scenes, and when someone leaves the house, the screen door slams with finality.

Details such as these are what take The Rainmaker from play to performance, with looks, leans and linens precipitating laughter and tears. The Theatre in a Garden has a rainstorm this season that you won’t want to miss.

The show runs Tuesdays – Saturdays, 8 pm; and Sundays, 7:30 pm, except for the 2 pm performance on July 3. Find additional details and buy tickets at peninsulaplayers.com.