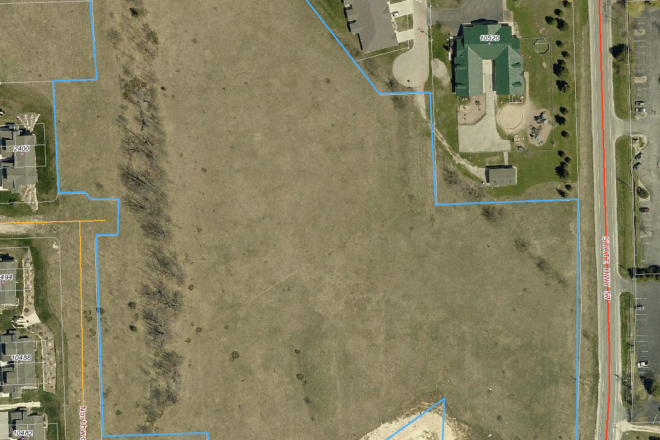 A developer has been awarded tax credits for a 45-unit affordable-housing development on 12.6 acres of vacant land between Northwoods Drive and Highway 57 in Sister Bay.

A project that would bring 45 affordable rental units to Sister Bay received a big boost this month when the Wisconsin Housing and Economic Development Authority (WHEDA) awarded $718,283 in annual tax credits to the project for the next 10 years.

Marissa Downs of Mosaic Ventures outlined the plan for 45 units on a 12.6-acre parcel near the Northern Door Children’s Center at a plan commission meeting last October. The one-story rental units would be built with one-, two- and three-bedroom floor plans with garages, individual entrances and rents between $332 and $800 per month.

Downs said the tax credits are a major step forward for the project, but they don’t seal the deal.

“It gets us close, but I’m now searching for grants and continuing to work with the village to see what they will commit to the project,” she said.

That commitment could come in the form of building road and sewer-system hookups, but the village is hesitant to pick up the tab after getting burned by developer Keith Garot on projects that were never completed, despite support from the village. Garot had agreed to build a retention pond that would service the area where Stony Ridge and Downs’ proposal would go, but he never completed it.

Northern Door County is desperate for affordable housing. A housing study that the Door County Economic Development Corporation commissioned in 2018 identified a need for nearly 200 rental apartments north of Sevastopol. The housing crunch has only intensified since that study was completed as real estate prices have soared and demand has skyrocketed for vacation rental homes.

“Usually when a community has such a high need for housing, typically the community is going to do something to support a project like this,” Downs said.

At least 84 rental units have been built in recent years at Niagara Ridge and The Glen. Those filled quickly, but with rents starting at $1,275, they are out of reach for many workers and senior citizens in a county where the average annual wage in 2020 was $37,440, according to the United States Bureau of Labor Statistics.

The award is part of $35.1 million in federal and state housing tax credits intended to advance housing opportunity and economic recovery in Wisconsin through the creation of 2,200 affordable housing units in the months ahead, according to a statement from Gov. Tony Evers.

WHEDA CEO Joaquín Altoro said this year’s plan for allocating the credits increased the emphasis on rural communities, supportive housing, sustainability and partnerships with developers from underrepresented communities. The 2021 projects range in size from a 24-unit project by the Lac Courte Oreilles Housing Authority in Hayward to a 173-unit, family-focused project by Roers Investments in Sun Prairie.