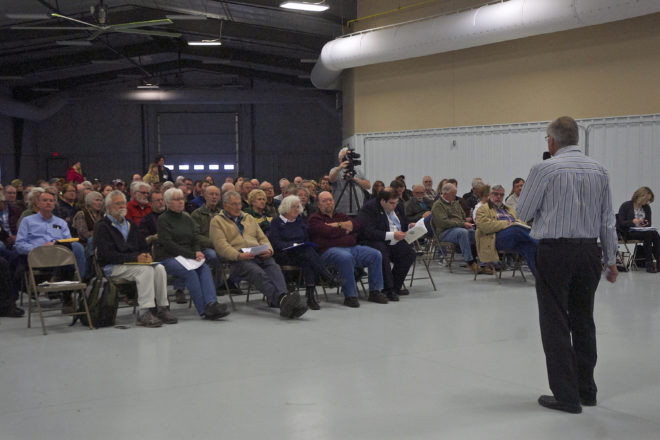 Robert Weidner, chair of the Kewaunee County Board, addresses the audience at the Feb. 20 multi-agency presentation on the state’s request for proposals to turn cow manure into biogas. Photo by Jim Lundstrom.

One thing was made abundantly clear at the multi-agency meeting held Feb. 20 in Luxemburg to hear details of the $20 million Focus on Energy biogas RFP (request for proposals) – no one yet knows the scope of such a project or where it will be located.

It has for some time been referred to as the Kewaunee County biodigester or biogas project, but as representatives from the three agencies that issued the RFP earlier this year pointed out, this is a competitive process. Applicants will be recognized for the number of points they are able to accrue in a list of items that measure need, urgency and other pertinent factors.

They pointed out that the $20 million from Focus on Energy could go to one well-planned large project, or possibly 10 smaller projects at $2 million each. It all depends on the proposals received.

The three agencies are the Wisconsin Department of Natural Resources (DNR), the Department of Agriculture, Trade and Consumer Protection and the Public Service Commission. They were directed by Gov. Scott Walker to come up with an RFP for a biogas project to deal with some of the manure being produced at industrial farms.

“This is a request for proposals, meaning we don’t have all the answers right now,” said Russ Rasmussen, the Wisconsin DNR spokesperson for CAFO issues and by now a familiar figure in Kewaunee County. “We’re waiting to see what proposals come in, what components are in there. That’s what is going to drive how we design the project itself. We’re looking for people to come up with innovative answers to help us solve a problem, the problem being to have agriculture continue as a viable industry while addressing the groundwater issues that exist in this part of the state.”

Extra points will be awarded to sensitive areas dealing with large amounts of cow manure, so Kewaunee County, with its karst topography and a cow population close to five times that of humans – people, 20,500; cows, somewhere in the neighborhood of 100,000 – has a big leg up in that department. Twenty-five points are also awarded to an RFP located in the Lake Michigan watershed. 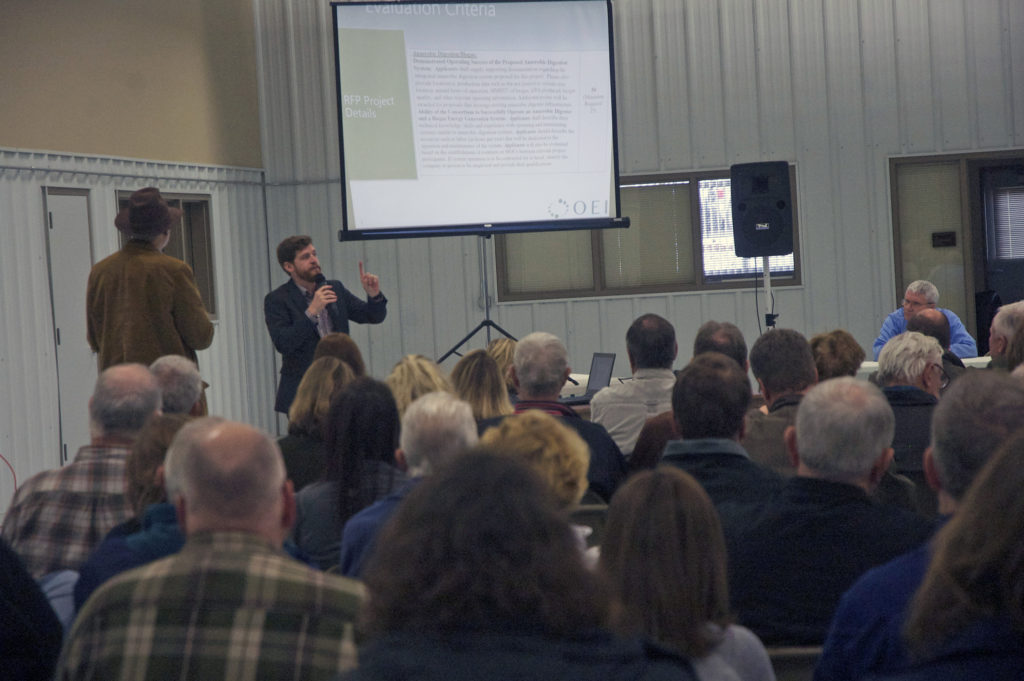 Clint Fandrich of the Wisconsin Public Service Commission talked about how his agency has been looking at anaerobic digesters and other technologies for Kewaunee County. Photo by Jim Lundstrom.

Rasmussen also pointed out that while the RFP is not intended exclusively for Kewaunee County, there are more funding opportunities for projects within the Lake Michigan basin, so that could play a role in awarding the RFP.

“What’s important to keep in mind, while we have several areas in mind, it’s a statewide program,” Clint Fandrich of the Wisconsin Public Service Commission told the audience.

“The key to the RFP,” Fandrich said, “is that the energy we’re talking about in the project proposal has to reduce the demand of electricity and/or natural gas at a Focus on Energy-participating utility in Wisconsin. That’s the bottom line.” He also pointed out that all the utilities in the area meet that bottom line.

Kewaunee County Board Chair Robert Weidner opened the meeting, saying the county was fielding so many questions about the RFP that it seemed prudent to call the meeting, especially for elected officials in northeastern Wisconsin.

Although a few others could have been representing Door County in the audience of about 150 people, the only Door County elected officials I saw were county Supervisor Megan Lundahl, Jacksonport Town Supervisor Tom Wilson, and Rep. Joel Kitchens, whose district includes Door and Kewaunee counties, as well as a segment of Brown County and a sliver of Manitowoc County.

“Door County is affected by what happens in Kewaunee County,” Lundahl said. “We have to protect our waterways and air. It’s very important to our tourism industry that we are seen to have clean air and water, as well as our residents. We already know we don’t want what’s happening in Kewaunee County to happen in Door. To be ahead of the curve is why I am here.”

Saying “Nobody believes we’re even close to solving the problem with anaerobic digesters,” Kitchens said he thought it was in the best interests of Kewaunee County residents to keep an open mind about a biogas project, but he is focusing his attention on the new rules that are being drafted for the karst region.

“That’s moving forward, and in the short term, that’s going to make a bigger difference,” he said. “Technology will eventually come along.”

The “soft” due date for proposals is May 1, but Fandrich said that date may be extended. Learn more about the RFP at psc.wi.gov/biogas/rfp.htm.