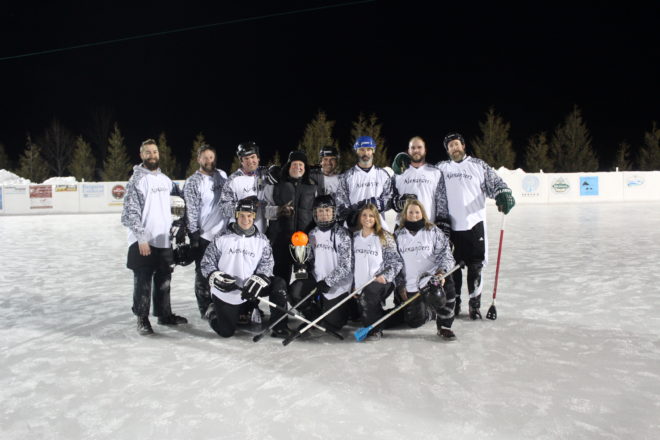 After one week of play, it appeared the Northern Door Broomball League was on its last legs. The Teresa K. Hilander Ice Rink manager had abruptly quit, and all games and activities at the rink were canceled.

But a new manager and staff turned operations around in short order, and their efforts culminated in a big turnout for the Hilander Cup Tournament Feb. 17, when Alexander’s took the title from defending champion Johnson Park in a 4-1 victory.

Alexander’s finished the season unbeaten and handed the Johnson Park team its only two losses. Earlier in the day, e-Tailer rallied to top Husby’s in overtime. Down 4-2 with just five minutes to play, e-Tailer stormed back, overcoming two goals from the dominant Paula Anschutz to win in overtime on penalty shots.

In the semifinals, Alexander’s topped a worn-out e-Tailer squad, and Johnson Park squeaked past Door County Brewing Co., 12-4. Alexander’s jumped to a 2-0 lead in the final and held off the younger, quicker Johnson Park offense primarily through the intimidation factor of Brian Fitzgerald’s impeccable gray beard.

Dozens of spectators and children turned out to take in the action, skate on the open rink and enjoy food and beverages from Casey’s, Husby’s, Door County Brewing Co., Mink River Basin, Alexander’s and Boathouse on the Bay.