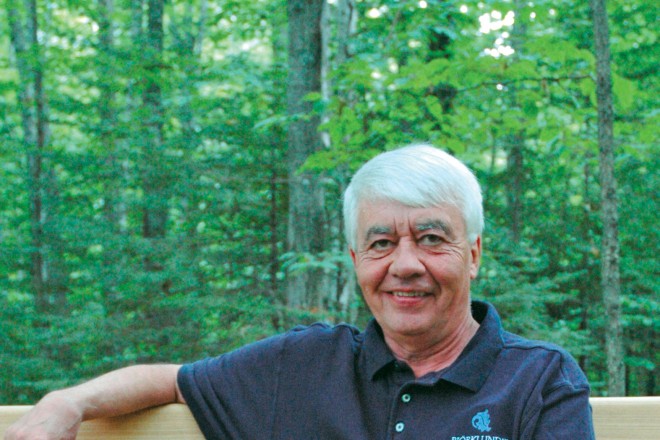 I’ve known Rik for over 20 years, having first met him when dating his oldest son. Our families are still close, and he officiated  at both my brother’s wedding and mine. We joke that he saved my dad’s life on the golf course years ago by yelling at my dad to “Duck, Terry!” – my brother had flung his club in disgust after a poor shot and the club was headed for my dad’s head. I know many people who have worked, taught, or studied at Lawrence University, and I have never heard anyone speak of Rik with anything but fondness, often in tones bordering on reverence.

In June of this year, Richard Warch – nearly universally known as “Rik”- retired as president of Lawrence University in Appleton, a position he held for 25 years. He and his wife Margot are now living at their home in Ellison Bay.

Highly respected for his fundraising abilities – in two fundraising campaigns alone he raised over 108 million dollars for Lawrence – Rik is also well regarded for having been involved in local civic organizations in Appleton, such as United Way, for having worked to engage Appleton residents in the college’s activities, and for spearheading construction of six major buildings on campus during his tenure as president. Anyone who knows him personally typically remarks on his quick, sharp sense of humor and wit; indeed, he is a very smart, funny man. He was named by a study conducted by the Exxon Foundation in the 1980s as one of the 100 most effective college presidents in the U.S ., about which he modestly comments, “That meant a good deal to me.”

Rik notes that his favorite part of being president of Lawrence was that the job gave him “the opportunity to be around bright, interesting people – faculty, administrative colleagues, students, and visitors. An academic community is a very lively, engaging place because of the people; that’s what I liked the most. I also liked the variety of the job – in a small place like Lawrence, you have the chance to be involved very directly in many aspects of the institution, external and internal, academic and non-academic. I enjoyed that variety, the feeling of being engaged with the place.”

Within a couple of years of moving to Wisconsin to work at Lawrence, Rik and his family began vacationing in Door County. They purchased a vacant parcel of land in Ellison Bay in 1985. With the arrival of grandchildren and in anticipation of retiring to Door County, Rik and Margot recently expanded the house they built on their lot in 1986 to “make it more of a home rather than a weekend retreat.”

When asked how he feels about retiring, Rik laughs, saying, “I don’t know yet! I announced my upcoming retirement to the Board of Trustees in October 2002. I accepted the fact that it was coming, but I didn’t mentally retire before I physically retired – I stayed active and involved right up until the last day, didn’t spend a lot of time thinking about retirement.” So far,  “retirement has been moving in, settling in, relaxing. I haven’t done as much golfing, swimming, canoeing – vacation-like activities – as I’ve wanted to yet.”

In addition to “vacation-like” activities, taking classes at The Clearing, Bjorldunden, and Peninsula Art School, and “surprises that I expect will come,” Rik is looking forward to doing a great deal of reading, traveling, and writing in his retirement. He has previously published one book, edited another, and published many articles on liberal arts education and higher education. He plans to “return to things I’ve written and see how to put them between two covers and to do some new writing about liberal arts education.” Having recently traveled to France, Rik and Margot are now getting into more of a routine in Door County. He would like to write every day for a set amount of time, noting that he will have to “try to bring some order and self-imposed discipline to writing since I won’t have any deadlines now!”

Rik has also been appointed by Wisconsin’s Governor Doyle to serve on the state Ethics Board, which deals with issues relating to lobbying and lobbyists and standards of conduct for state government officials, and plans to continue serving on the board of the Fox Cities Performing Arts Center in Appleton. He and Margot look forward to finding volunteer opportunities in Door County once they’ve had a chance to get to know the community better as full-time residents. Rik notes that, “We know people who have been here for many years, who are year-round residents who are devoted to the place, that find it a stimulating place. We’ve known Door County as very ‘some-time’ residents up until now. There are obviously aspects of the county that we have not experienced and therefore don’t know about, and I look forward to learning more about and contributing to the community.”

Although Rik says his one fear regarding retirement is that he might “get antsy,” that seems highly unlikely given all of his  plans, interests, and talents. More likely is that he and Margot will be busier than they can imagine, and that the Door community will be greatly enhanced by their presence.

Chartered in 1847, Lawrence was one of the first colleges in the U.S. founded as coeducational. With an enrollment of about 1,300 students from nearly all 50 states and more than 50 countries, Lawrence is located on an 84-acre campus overlooking the Fox River in Appleton, Wisconsin. A liberal arts and sciences college, Lawrence is also known for its excellent conservatory of music.

Rik states that, “Lawrence is at a scale and has a mission as a liberal arts and sciences college that I think is the most powerful form of education, having experienced it myself as an undergraduate at Williams College. I was proud to promote that for Lawrence. Plus, Lawrence’s undergraduate conservatory of music sets it apart from other colleges; I came to appreciate music in ways that I hadn’t before.”

Lawrence University also owns “Bjorldunden” in Baileys Harbor, a property of more than 400 acres on over a mile of Lake Michigan shoreline, containing a lodge, a chapel, and various other buildings the college uses for faculty and student weekend seminars and retreats during the academic year as well as week-long courses open to the public in the summer. Rik refers to Bjorklunden as “Lawrence’s signature presence in Door County,” remarking that he “hopes to have opportunities to support and promote Bjorklunden” during his retirement, as “it’s a place and a program in which I am heavily invested. I played a role in convincing the Board of Trustees to rebuild after the 1993 fire that destroyed the original lodge.” In fact, unbeknownst to Rik, this past year Lawrence trustees, alumni, and friends ran a “Thanks, Rik!” campaign which raised over $1.5 million for an endowment for Bjorklunden in his name.