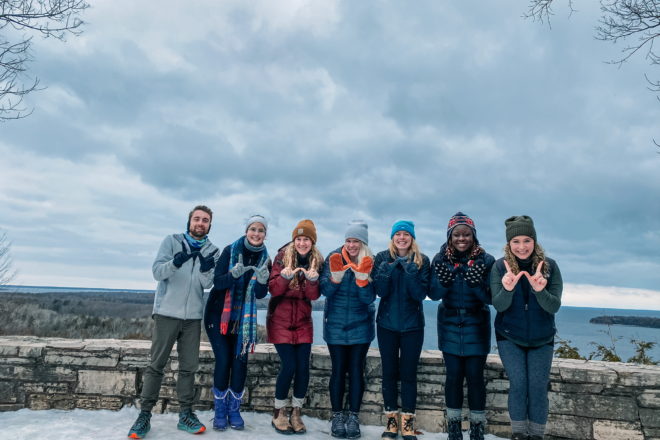 UW students get a look at caregiving on the peninsula

Johnson, who was one of eight University of Wisconsin-Madison nursing students to participate in a winter immersion course in Door County, was surprised to witness the deep level of communication between health-care providers and patients in Door County.

The students, who are participating in a 41-student, 12-month, accelerated second-degree nursing program taught by Dr. Shawn Skurky, spent two weeks in Door County to learn about rural health and health care.

Amid their packed schedules, they also learned what it’s like to be a local by visiting the Sister Bay Bowl, Husby’s and Peninsula State Park.

Part-time Ephraim resident Peggy Zimdars, who’s on the board of visitors of UW-Madison’s School of Nursing, thought Door County would be a perfect place to teach the students about rural health, and she said having the program take place during the winter versus the summer would better showcase Door County’s rural nature.

She enlisted the help of nurses Donna Scattergood and Kathy Wagner, among others, to organize a program on the peninsula with the School of Nursing, and the county was excited to welcome the students. The program is now in its second year.

“The collaborative spirit in the county and how people up here know each other – they just approach how they do things from that perspective,” Zimdars said. “I think lots of times we look at rural health care as what isn’t there and what we don’t have, and I just saw up here a lot of strengths and just thought we need to work with strengths and not challenges.”

The peninsula’s geography creates certain barriers to good health, such as transportation and housing challenges. But it also drives businesses and community members to collaborate with each other instead of competing with each other, Zimdars said.

“Because there’s the relationship to other people, or they’re your neighbors, I see that people not only have a passion for the work that they do in different services and organizations, but they also love their community, and they love the people in their community, and I think that’s a really, really big strength up here,” she said.

After experiencing the program last year, one student told her, “Now I know what a good community looks like,” Zimdars recalled.

This year’s student cohort has various undergraduate and career backgrounds: Tamar Meyers started out with a journalism and psychology degree and worked as a journalist; Kristin Treichel was a soccer coach and bank teller who moved to Spain for a year; Hannah Bonneville studied sociology and health disparities and worked in a level-one trauma center; and Bonnie Johnson earned her degree in rehabilitation psychology and special education from UW-Madison.

“They each bring so much to nursing,” Zimdars said. “To see them collaborate and share that background information, it’s just really exciting for me.”

Studying nursing in Madison, working in trauma centers and being certified nursing assistants elsewhere has shown the students how health care works in bigger cities. In Door County, they learned that some of those lessons don’t apply in rural communities.

“In Madison, they say, keep someone alive for 10 minutes,” Zimdars said. “Up here, and especially on the island, it’s a lot longer time.”

Door County’s geography means that in Northern Door, the nearest emergency room may be at least 30 minutes away in Sturgeon Bay.

Johnson said she recognized how the medical programs in the county are reliant on each other and saw how they have found strength by sharing resources with each other and making referrals to other programs when one is lacking in a certain area.

“That’s where a large community like Madison can learn from Door County,” Johnson said. “The collaboration and strength in that are really beautiful to witness.”

The students found that a deeper level of communication exists here compared to bigger cities, and not only out of necessity. They’ve had experiences in which communication between even the nurses and doctors isn’t up to par.

“It seems to be a priority here,” Johnson said, “that their communication is not only clear, but they reach back out and check back in after a collaboration. It seems like everyone looks out for their neighbor here – not what you see in a big city.”

Some of the students’ favorite parts of the program took place at the Door County Medical Center’s Emergency Room. Johnson got to shadow a nurse who had also gone through an accelerated program. Treichel was able to start five IVs (intravenous therapy) and witness a full-knee-replacement surgery in the operating room.

Bonneville enjoyed seeing the process on Washington Island, which is even more rural. She was surprised that the medical professionals had to run to the ferry to get lab results.

“I felt like it was really valuable in terms of learning how to use the resources you do well and being really strength focused,” Bonneville said.

All of the students’ experiences in the county led to more questions because they were learning things that they may not touch on in school. Bonneville said she felt as though she could have spent five years here and still not completely grasped everything about rural health.

In addition to spending time at health-related organizations, the students also participated in panels and roundtables. On Jan. 14, community experts and philanthropists talked about the strengths and challenges that affect a community’s health. Elements such as education, the economy, unemployment rates, housing costs, environment, vitality and home ownership are all things that have an effect on the well-being of a community, Scattergood said.

For nurses like Scattergood and Wagner, nursing isn’t just about what happens in a doctor’s office or emergency room. It’s also about going beyond the facility’s walls to examine those other factors and volunteer time to make improvements.

After spending two weeks here, most students shared the sentiment that there’s a lot more to nursing than being at the bedside.