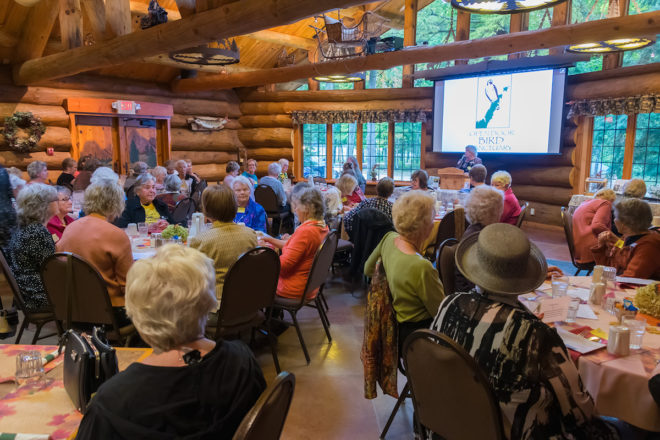 All P.E.O. chapters in Door County gather for an annual meeting. Photo by Len Villano.

A young woman at Gibraltar High School named Jen Moore had aspirations to pursue a career in nursing. When it came time to apply to colleges and for scholarships before graduation, her father wouldn’t sign her applications. He was in the Air Force and wanted her to join the service and earn her education there.

Refusing to give up on her dream, Moore continued looking for scholarships and found one called the ELF Loan from an organization called P.E.O.

Cheri Boock, at the time a new member of its local chapter EJ, was a former Gibraltar teacher who remembered the impression Moore had made on her.

Her chapter became invested in helping Moore to succeed, and Jill Lhost, the current president of local chapter EJ, said P.E.O. was there through all of it — not just the loans and paperwork.

The chapter gave Moore a handmade quilt at Christmas, and it even bought her a used car from a P.E.O. member when her own broke down.

“They truly were a godsend,” Moore said. “It feels like a lifeline, like a miracle. I remember when I really got involved with them and got to meet them all — just seeing how amazing a group of people that they are that they want to reach into our community and help people further their education. And really, they don’t see anything from it other than to watch us grow.”

Moore has since earned her bachelor’s degree in nursing; works as a registered nurse in De Pere, Wisconsin; and lives in Green Bay with her fiancé, who also works in the medical field.

“It took quite a few years, pretty much all through getting my associate degree, for my parents to really come around to my plan for my future,” Moore said. “When I got my bachelor’s, they were ecstatic for me.”

The organization that helped Moore reach her goal is the P.E.O. Sisterhood. P.E.O. stands for “Philanthropic Educational Organization.” This year, the half-million women who make up its international chapters are celebrating 150 years of service.

The organization has granted more than $344 million in scholarships to women in pursuit of their education. Though it’s spread across the United States and Canada, there are five chapters of women right here in Door County who are quietly making substantial contributions.

Tracy Vreeke of Sturgeon Bay also sought the help of P.E.O. when she decided to return to school at the age of 52. At the time, she had daughters in college and was a caregiver to two family members with chronic illnesses.

She had a passion for reading, libraries and how they serve the community, so she decided to earn her master’s degree in library and information science. She planned to obtain her degree on a very part-time basis, she said.

But then Vreeke accepted a new position as the Nicolet Federated Library System director. That required her to earn her master’s degree in library and information science within 15 months of her hire date.

She was already enrolled, but she wasn’t expecting to jump into school full time. Her mother connected her with women from Chapter EI, and they encouraged Vreeke to apply for their PCE grant — a scholarship for continuing education.

“P.E.O. saw a need and stepped in and helped me with that,” Vreeke said. “The aid I received from P.E.O. was really crucial in me being able to finish my schooling on a time line that would allow me to take my new position.”

The sisterhood, founded by seven college students in Iowa in 1869, sits on a sturdy foundation of friendships built through advancing and supporting the education of women, whether they are right out of high school or returning to school later in life.

“Strengthening and deepening those friendships through this bond of having something in common to work toward is just beyond reproach,” Lhost said.

Some chapters also have scholarships of their own. P.E.O. chapters often go beyond the call for money by supporting their scholars in other ways, such as sending granola bars and gift cards, meeting for coffee dates, providing rides or taking care of children.

“We try to go beyond the scholarship part … and make it a personal investment,” said Buffy Andreae, who’s one of three original members of the first Door County chapter, DF. “I think that’s so different from most other organizations.”

DF began in Sturgeon Bay in 1981 when vacationing women began meeting informally in their homes monthly or a few times a year, Andreae said. As the friendship among these women grew, they decided to establish a formal chapter.

Eventually the chapter grew so big that it was impossible to host it in one home, so another chapter, DQ, broke off. Chapters are assigned letter names in alphabetical order within a state, and then the names start over with double letters if necessary. Eventually three more chapters — EE, EI and EJ — spread across Door County.

The activities of the organization used to be secretive. To have a feature in a magazine or newspaper, or even to advertise fundraising activities under the P.E.O. name was virtually unheard of 10 or 15 years ago, Lhost said.

“Why should it be quiet, really?” she asked. “Shout it from the rooftops!”

Lhost’s chapter runs the spring community rummage sale in Sister Bay every year, and only two years ago, it started sharing that the event was a P.E.O. fundraiser. That’s when it went from raising about $800 to $1,000.

P.E.O. women are making significant, lasting investments in the education of women, and though they aren’t monetarily compensated for their work and commitments, the bonds they build with one another make their efforts so worthwhile.

Original DF member Helen Reed summed it up: “We support our sisters.”