Carl Scholz will tell you he has had never had a dull moment in his 86 years of living. He’ll also tell you one of his biggest surprises came on May 1 of this year when he was lured to Sevastopol School on the pretense of discussion about a scholarship in his name, when in reality it was an all-school assembly to honor Carl before he and his son Jon headed out to Washington, D.C., on May 3 as part of the Stars and Stripes Honor Flight. This flight took a planeload of Wisconsin World War II and Korean War veterans for a one-day whirlwind tour of the military monuments in the capital city.

Carl, who spent 37 years at Sevastopol as superintendent and educator before retiring in 1989 and still retains the title of youngest school administrator ever in Wisconsin (he was 26 when hired for the job), had no idea what was up when he was lured to the school. 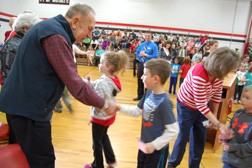 “What a surprise!” Carl said of the assembly in his honor, and quickly added, “And a bit embarrassing.”

Tributes were paid to Carl by retired Sevastopol teacher Mike Madden and Door County Veterans Service Officer Scott McFarlane. The assembly ended with the children filing past Carl to shake his hand.

“I really did appreciate it,” Carl said. “What a great school and a great rural community.”

Carl’s son, Jon, a resident of Cedarburg, made the arrangements for his father to be a part of the 21st Stars and Stripes Honor Flight with 51 other WWII veterans and 64 Korean vets.

“I did it because I saw the opportunity to spend the day with my hero,” Jon Scholz said. “He has always been both the perpetual teacher and student, learning and exploring. His stories about being a paratrooper in the 11th Airborne Division of the Army, took on a new understanding to me. Dad spoke of the significant role the 11th played in occupation of Japan following the two nuclear weapons dropped on Hiroshima and Nagasaki. 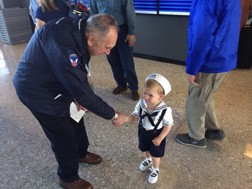 “The experience was exceptional on multiple levels, meaning from my pure education of the wars, to understanding my father’s time in the army, to the value of the war memorials in Washington,” Jon continued. “From understanding the Honor Flight history, volunteers, guardian responsibility, to complete organization of the day’s events.”

“It was great, unbelievable,” Carl said of the Honor Flight. “They really put some effort into that flight and all the things associated with it.”

Ironically, one of the organizers and ambassadors of the Stars and Stripes Honor Flight is Joe Demler, who was a classmate of Carl Scholz at Port Washington High School.

Demler served in the European Theater during World War II and was captured at the Battle of the Bulge and sent to a Nazi prison camp. When the camp was liberated by Allied troops in 1945, Demler weighed about 70 pounds and was dubbed “The Human Skeleton” when his photo appeared on the cover of Life magazine. Demler’s story is recounted in a 2012 documentary called Honor Flight.

“He’s always at the terminal when flights return and he was there when we returned,” Carl said of Demler. “If you’ve seen his photographs, you wouldn’t think a human being could survive with no flesh.”

Carl’s military service began in 1945 when he joined the Army at 17 years old and became a paratrooper in the 11th Airborne. He served in the Pacific Theater, specifically in Guam, Saipan, Iwo Jima and occupied Japan. When he left the Army in 1948, Carl used the GI Bill to attend the University of Wisconsin in Madison and then went on to his career as a beloved educator and administrator in Sevastopol, which, Carl will be happy to tell you, means “a place of glory” in Greek.

While Carl said he had previously seen all but the Air Force monument in Washington, D.C., he was happy to revisit all of them with the group of fellow veterans and their “guardians” on the Honor Flight.

“Just being there is impressive,” he said. “We certainly, as Americans, should be proud of what they’ve done in Washington as far as the monuments honoring service people. It’s great.”

“I had a nice little chat with Bob Dole,” Carl said. “I mentioned to him that I was a friend of Gaylord Nelson’s. That brightened him up.” 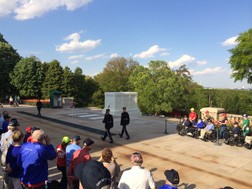 After the whirlwind trip, the Stars and Stripes Honor Flight returned to Mitchell Field in Milwaukee to a warm greeting from families and well-wishers.

“The reception at Mitchell Field terminal when we came back was unbelievable. There must have been a couple thousand people there,” Carl said. “I certainly appreciated it. They must have had hundreds of volunteers. It was really well organized and implemented.”

Jon Scholz said taking part in the Honor Flight with his father showed him how important the flights are for all veterans.

“The hundreds of genuine people saying ‘Thank you for your service’,” he said. “These words on that day were very meaningful and will never grow old to any veteran.”