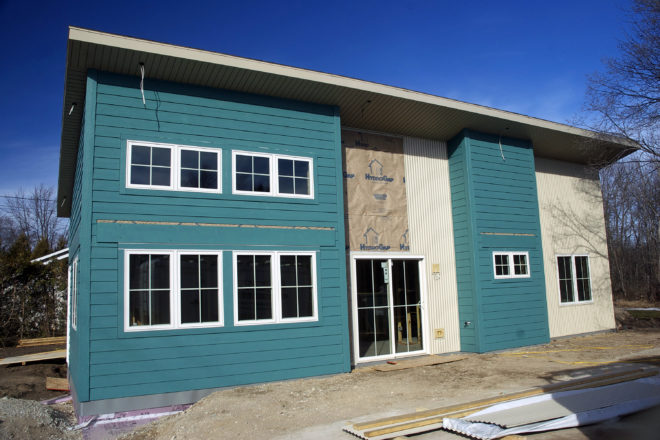 Virge Temme has seen too many people become prisoners of the cost of their homes, people who believe they have achieved the American dream by living in a McMansion, even if they can’t afford to furnish that dream home and have to plow every cent they earn into keeping the place.

As an architect, Temme thought there must be a better way.

On an incredibly warm and sunny Feb. 19 she introduced local media and a few curious folks to what she believes is the answer – a small but intriguing blue building in a quiet residential neighborhood not far from Door County Medical Center.

The building is set back from the street, yet with its steeply pitched roof, brilliant color and non-traditional design, it stands out from its surroundings. It’s a 1,030 square foot home built from Temme’s design by Ahnapee Construction for Scott Strang and his fiancé, Erica Nelson.

The building concept is called SAGE. 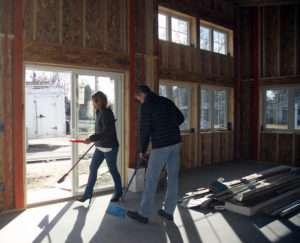 “First of all, they start off small,” Temme said in describing SAGE. “They’re affordable. They’re designed to be afforded by a household with a $50,000 income, which is the average income in Door County. The G is for green. They’re all very energy efficient. And E is expansive. This house is designed to be expanded to the back. The window placements and plumbing rough-ins are back there if they want to expand.”

Before diving into this project, Temme convened a focus group of Door County residents, spanning the decades, income and education brackets.

“The 24-person focus group met with homeowner Scott Strang and me for nearly 12 hours last winter to reflect on home design requirements and preferences which could allow an owner to adapt a home to serve and entire lifetime,” Temme said. “I undertook the design of this home as a research project, trying to determine the most efficient and cost-effective way to design a super-low-energy home that would be affordable for Door County’s average income households, but that would be also easily expandable should life situations suggest an expansion of the house size to accommodate such needs as growing families, lifestyle changes, or in-home care providers.”

The goal was to come up with a modern, energy-efficient home that would cost less than $150,000.

“It took six months, six complete re-designs, hours and hours of research and planning sessions between Scott, me, the builders, subcontractors and suppliers to get to the point of a finished plan that could be built for less than $150,000,” Temme said.

She worked out that with mortgage, insurance and property taxes, a family would pay less than $900 a month for a home.

“That’s less than what many people are spending on apartments,” she said. “Plus, the energy costs are going to be minimal.”

She explained that the house is insulated at double the standards required by the state.

“With that little bit extra cost, we have brought the house down from more than 60,000 BTU to 10,000 BTU. Hopefully, it will be very rare that they even have to have the furnace running. This is the message I want to get across: For just a little bit extra, the return will be phenomenal.”

Other energy efficiencies include southern exposure entrance with passive solar gain to offset heating costs, plus a super-energy efficient heating plant. The windows will also help to heat the slab in the winter, and Strang, who has been doing his own research, said the dining room floor will be dark to absorb the solar heat and his dining room and coffee tables will be of dense material to hold the thermal heat in winter.

“I’ve built lots of boats, but I’ve never built a home. This, for me, is a really big boat,” said Strang, manager of CenterPointe Yacht Services.

But it was really the idea of living small and efficiently that attracted him to the project.

“I’ve been living small since 2002,” he said. “I didn’t want to buy a small house and come home to what I call the domino effect of rebuilding a home. I work for a living and don’t want to come home to sawdust for years and years. So we figured for about the same money, we could have a home that’s super-insulated and costs almost nothing to heat. It all kind of fell together.”

Temme said Strang’s home and another one she is doing in Sister Bay should be completed in May.