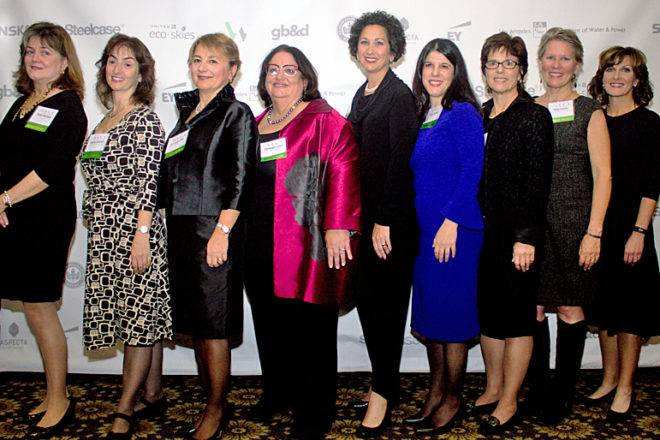 After being recognized by gb&d (Green Building and Design) magazine and the U.S. Green Building Council with a Women in Sustainability Leadership Award (WSLA) on Nov. 7, Door County architect Virge Temme doesn’t feel so alone as a promoter of sustainable building.

“My personal takeaway was that I feel I have comrades in arms now,” she said. “I always felt kind of isolated, being the only one in the area that does this. I didn’t have a wide network to talk to, and now I feel that I do.”

The awards were created to celebrate the achievements of women who are making lasting change and to identify and connect the most powerful women at the forefront of sustainability. WSLA recognizes and advances these top-level female sustainability executives who then, in turn, support younger women.

The award is considered to be one of the most prestigious awards in the world of architecture. Past winners include Hillary Clinton; Bea Perez, vice president of Coca-Cola; Angela Forster-Rice, managing director of Environmental Affairs & Sustainability for United Airlines; Arielle Bertman, renewable energy investment leader on the Green Business Operations at Google; and Cindy Ortega, chief sustainability officer at MGM Resorts International.

“These are the women in the industry who are working to make the world a better and greener place,” said gb&d publisher and CEO Chris Howe.

“Talking with these women, what they do go through, what their challenges are in reducing carbon emissions, it really opened my eyes to the others out there,” Temme said about her fellow recipients. “Sitting around this table with the other women and listening to the impact on their communities was powerful, and it really brought it home once again, not only the environment, but also what women in construction and all these fields are going through. It’s definitely been an uphill battle for all women as far as gaining recognition for what we do, and as far as having the power to implement the changes we want to make.”

She added that there has already been a direct impact as a result of meeting these women. Temme said she plans to travel to Chicago in the near future to meet with Ellen Sargent, director of sustainable initiatives at the Chicago Housing Authority.

“She actually is the woman who has brought the whole LEED program to Turkey, Bahrain, Russia. She taught more than 20,000 people, and she is a woman teaching all men,” Temme said. “She’s working on a program to create housing for Syrian refugees. We kind of want to become a part of that. As we’re getting more of these unprecedented storms, flooding, droughts, as we see our population start moving from one place to another, as food runs out, as fire sweeps portions of the earth, we’re going to see a lot of population changes. I think this is going to be the first time since probably the 1940s here in the United States where we’re going to see a dramatic uptick in the need for housing, and the only way we can do it is net zero energy, otherwise we’re contributing to the very problems causing all the weather changes.”

Which has led Temme to take a stand on the projects she accepts.

“I’m not going to take any projects at all that are not near-net zero or net zero energy,” she said. “My clients get it and more and more people are getting it.”

Temme said when she tells potential clients that she builds homes that are 80 percent more energy efficient than called for in code, the response is always the same: “That’s exactly why we’re calling you.”

She has also committed her business to complete transparency.

“We are posting the whole evolution and cost so it will be completely transparent,” she said. “People can see it actually costs less in the long run to build near-net zero homes than to build conventionally.”

She has recently expanded her architectural practice into a design-build firm to train contractors in the construction of high-performance buildings and to create opportunities for other women to enter the field of construction. She is currently developing a construction education program for young girls.