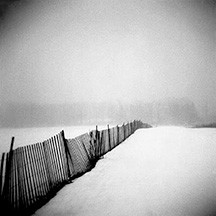 Arlene Stanger’s image “Snow Fence” was recently juried into the 8th Annual Juried Plastic Camera Show. The exhibit will run from March 11 to May 3 at the Rayko Photo Center in San Francisco.

The Baileys Harbor resident’s images have been juried locally into the Miller Art Museum in Sturgeon Bay, the Hardy Gallery in Ephraim, the Guenzel Gallery at the Peninsula School of Art, and the Peninsula Pulse’s Hal Prize issues as well as exhibits in Madison, Oregon and Texas. Last year she also received nominations and an Honorable Mention in the 9th Annual B&W Spider Awards.