Two species of butterflies have proven to be dependable and predictable members of the August scene over the past 45 years that I’ve been in Door County, the small Pearl Crescent and the larger Great Spangled Fritillary. These past few drought-stricken summers have brought out far fewer butterflies with some species being completely absent.

There aren’t many butterflies more common in the Americas than the Pearl Crescent, which is seen from southern Argentina northward to the Mackenzie River on the Arctic Ocean. One noteworthy feature of this little creature, named for a tiny pearl-colored crescent on the undersides of its hind wings, is its restlessness one minute – flitting here and there, constantly on the wing – and then suddenly perching on a flower the next and hardly moving.

The fact that they are often very approachable means that nearly every child or adult in my past butterfly “expeditions” that I’ve led caught at least one or more of the Pearl Crescents. There were days that some energetic students caught so many they soon came to recognize them well and would not swing their nets at them anymore. 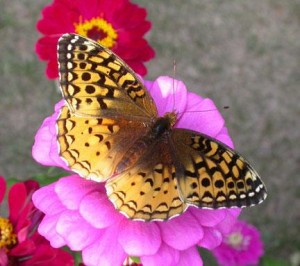 Never in my life did I encounter a more patient butterfly than the one that patiently posed on a beautiful green Zinnia in our front yard for at least 10 minutes. It happened on an afternoon when my nature photography class was exploring our front yard looking for interesting things on which to practice their close-up photography. Most of the students went home with some nice shots of that butterfly, wings held out so perfectly parallel to the camera lenses while it posed as though frozen in place.

Dry weedy fields, woodlands that have some sunlight reaching the floor, and damp meadows are their preferred habitats. What appears to be a very gentle creature may surprise you. It is one of the so-called “warlike” butterflies often observed chasing other considerably larger butterfly species from its territory.

Eggs are usually laid on their primary host plants, the various asters, the larvae hibernate for the winter when only partially grown, and resume feeding in the spring. Finally they pupate and eclose (emerge) as adults in this region in late May or early June. They will breed continuously until frost, having at least two or three broods.

The Great Spangled Fritillary (FRIT-il-lary) is the other one of the few consistently seen butterfly species so far this summer. Surely the rather isolated blaze of color provided by the tall Zinnias in the two 20-foot-long beds along our front-yard sidewalk is largely responsible in luring these flashy creatures to the copious and rich nectar of these flowers. Often there’s a preponderance of the strikingly colored “two-toned” females in their brown and tan coloration, along with a few smaller Atlantis or Aphrodite Fritillaries.

A close look at the underside of one of the Great Spangled Fritillary’s hind wings is important in accurately identifying this handsome species. A wide yellow-tan band separates an outer row of uniformly shaped silver spots from an inner row of irregularly shaped silver markings. No other fritillary butterfly of this region displays this set of easily seen features.

The Great Spangled Fritillaries I photographed in the past have been remarkably tame, allowing me to approach (moving in slow motion) with my small four megapixels digital camera, set to “macro mode,” to within three or four inches for ultra-close images. Other species, such as the White Admiral or Painted Lady are slightly less tolerant of my close approach and the Red Admiral will fly off in an instant as soon as I get to within a few feet of it. 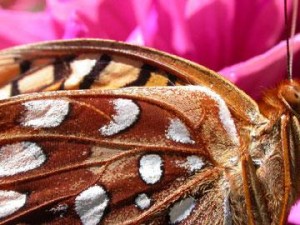 The Great Spangled Fritillary has an unusual life cycle. The adults have recently eclosed from their chrysalids, are in the process of gaining strength from the nectar of flowers, and either have already mated or soon will be doing so. The females will then lay eggs on the leaves of wild violets or on nearby twigs or foliage.

Fortunately, there are thousands of violet plants growing in our woods, which undoubtedly is why these large flashy butterflies are always quite numerous here.

The eggs soon will hatch and each of the tiny caterpillars will eat its own egg case and then crawl down into the woodland duff where it will spend the remainder of the year and the entire winter. Come spring, these incredibly small caterpillars will locate the young tender leaves of violets, their host plants, and eat until they mature. They will become two-inch-long black spiny caterpillars by early June when they change into their chrysalids. The adults will eclose several weeks later. These are the Great Spangled Fritillaries you are now seeing.

The world of butterflies surely is wonderful, especially because they are so capable of dealing with all kinds of weather, including the serious drought that is now having such adverse effects upon people. 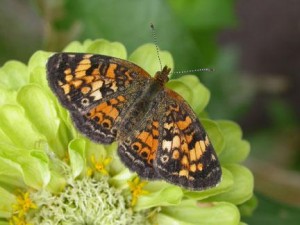 My passion for getting close to nature and my unusually memorable photographic experience with the Pearl Crescent butterfly reminded me of a saying by Johann Fabricius, Danish entomologist (1745-1808): “Nature maxime Miranda in minimis,” meaning, “Nature is to be admired in those works which are least.”  Well said!