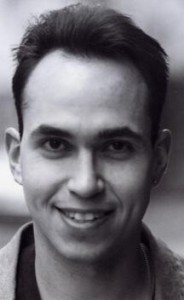 As part of National Poetry Month, Paul McComas will deliver his overview of poetry entitled, “Poetry in (E)motion: The Many Moods of Verse” at Third Avenue Playhouse on Sunday, April 25 at 2 pm.

An author, educator and actor, McComas incorporates lively readings of – and incisive commentary about – works by contemporary poets like Maya Angelou and Billy Collins, along with their predecessors including Shakespeare and Frost. A trio of “musical poems” or songs, performed live with guitar accompaniment, fill out this enjoyable and edifying program.

Born in Milwaukee, McComas resides in Madison. He is the author of three critically acclaimed books: the comedic coming-of-age novel Planet of the Dates (2008; recently optioned for a Hollywood feature); the recovery-through-nature novel Unplugged (2002); and the short-story collection Twenty Questions (1998; now in its third printing). McComas is also the editor of the multi-author anthologies First Person Imperfect (2003) and Further Persons Imperfect (2007). A dynamic performer, McComas has presented his riveting live shows and monologues at 90 venues nationwide, including three prior performances at TAP.

Following “Poetry in (E)motion,” local poets will preview the annual Scandia Exhibit which pairs visuals with poems. This year the subject is “School House Poems” which will be read as photos of the schoolhouses are projected behind them. An open mic facilitated by Henry Timm will follow the readings.

Tickets for “Poetry in (E)motion and the Scandia Exhibit are $15 for adults and $12 for seniors and students. Tickets are on sale at the theater box office, 239 N. Third Avenue, Sturgeon Bay, 920.743.1760. The theater box office is open Monday through Friday, 10 am – 2 pm, and one hour prior to performances. Tickets are also available at Dancing Bear, 13 N. Third Avenue, Java on Jefferson, corner of Fifth Avenue & Jefferson, and online at http://www.ThirdAvenuePlayhouse.com.