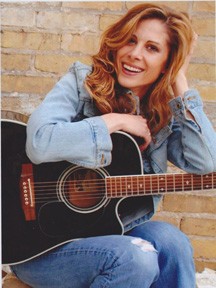 Beth Kille will be joined by Tony Kille on drums, Michael Mood on bass and Michael P. Tully on guitar when she plays the Unitarian Universalist Fellowship April 5 at 7 pm.

Kille is a 19-time Madison Area Music Association (MAMA) award-winning artist from Madison who has been cranking out her unique blend of rock, country, folk and blues since 2000. From house concerts and coffee houses to headlining spots at festivals, her love for the stage and genuine passion for performance shine through in all settings. She fronted the Wisconsin Area Music Industry (WAMI) award-winning band Clear Blue Betty before launching her solo career.

She has penned hundreds of tunes and has been recognized on a national level for her writing. She won the Nashville Songwriters Association International Song Showdown in 2009 and received an Honorable Mention in the Country Music Television/NSAI Song Contest in 2012. She has been named Female Vocalist of the Year twice at the MAMA Awards (2006 and 2010) and snagged the coveted Artist of the Year award in 2011, a rare feat for a solo artist.

Staunchly committed to the advancement of young musicians and songwriters of all ages, Kille works as the Music Director for Girls and Ladies Rock Camp Madison, hosts Madison’s Chick Singer Night and sits on the Board of Directors for the MAMA.

Admission is $10 and a complimentary reception will follow the concert. The Unitarian Universalist Fellowship is located at 10341 Highway 42 in north Ephraim. For more information call 920.854.7559.