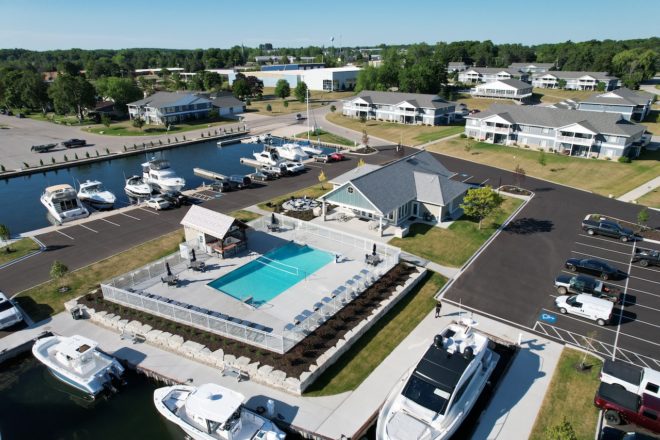 During the past year and a half, Sturgeon Bay–based Bay Marine became a full-service business for boat and yacht owners when it purchased – and then completed a $5 million remodel of – Sturgeon Bay Yacht Harbor. Submitted.

Bay Marine survived a Chicago fire and a Florida hurricane this year to remain a regional leader and a national contender in boat and yacht sales and service.

Mark Felhofer took over his father’s business in 2000 and along with his brother, Matt, transformed it from a roadside sales lot into a full-service yacht and boat sales and service business with marinas on Lake Michigan in both Sturgeon Bay and Chicago as well as in Fort Myers, Florida.

Bay Marine has approximately 40 employees in the Midwest and 10-15 in Florida. At times, technicians also travel from state to state to help with projects or work on boats. Employees have now shifted to the boat-storage season because Bay Marine has 150,000 square feet of heated storage space, combined, near Chicago and around Sturgeon Bay.

“We can handle almost anything this market needs,” Felhofer said, noting that Bay Marine is now a top regional competitor on the Great Lakes.

Felhofer said he convinced his brother, Matt, to leave his work in business and finance more than two decades ago because he had a vision of what Bay Marine could become.

Their dad, Fran, sold his first boat at his dad’s service station at the corner of the state highway and Georgia Street, where Hardee’s used to be, and then built a sales lot for Bay Marine and Lawn “far out of town” – across Egg Harbor Road from the present-day CVS. Later the family moved the business to Highway 42/57 south of town, and the Felhofers continue to operate there because of its great visibility.

Years after helping their dad with his projects as they were growing up, Mark and Matt saw an opportunity to vastly expand Bay Marine. They set a goal to be a place where boat owners and yacht buyers wanted to do business and a workplace where skilled personnel wanted to be.

To that end, between 2004 and 2015, they continued to expand their major service and storage facilities, including the headquarters along Sturgeon Bay at 155 E. Redwood St.

The Felhofers said they have seen tremendous growth in the luxury-boating portion of their business since the COVID-19 years, when many people determined that “life is indeed better with a boat.”

They became one of the largest Cruiser Yachts dealers in the world, and they now offer products from Riviera Yachts and a half dozen other boat and yacht makers. In 2016, they launched their Chicago Yachting Center and showroom on a Lake Michigan harbor in Waukegan, Illinois.

It’s the nearest facility to downtown Chicago with access for deep-water yachts. Similar to the Sturgeon Bay facility, it has a massive, 80-ton travel lift for launching yachts into or hoisting them out of the water.

In addition to routine service, the company has built a reputation for extensive repairs and reworking boats and yachts, as well as the design and construction of yachts between 50 and 115 feet.

It’s tough to imagine a year of more ups and downs – triumphs and major obstacles – than the Felhofers have had, including two major challenges for the business. One was Hurricane Ian, whose storm surge was still a six-foot wave when it hit the Bay Marine facility in Fort Myers, Florida.

“We were pretty much in the eye of the storm in Fort Myers,” Matt said. “Even though we were four miles inland with our sales and service offices, the facility was filled with over two feet of water, and most of our inventory, 17 boats, went up and over our fencing and down the road literally a mile.”

They have since picked up boats from roads and other properties, but most of the inventory was a total loss.

While gearing up for this past boating season, another of the challenges came in the form of recovering from a February fire in their business in Waukegan.

But this month, Boating Industry magazine named Bay Marine one of the top 100 dealers in the nation, and in the spring, the Felhofers celebrated the completion of the Sturgeon Bay Yacht Harbor reconstruction.

“We always had our eyes on the Sturgeon Bay Yacht Harbor because it had a strong history in the market with recreational boaters,” Matt said. “The facility was probably one of the most prominent marinas on the Great Lakes in the 1950s, and it went into significant disrepair.”