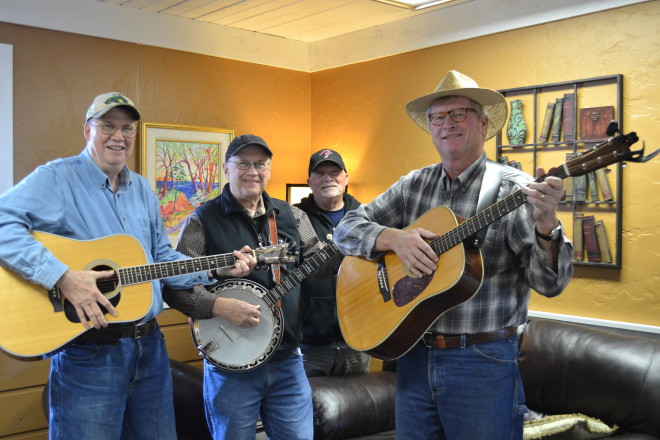 In a county where rock ‘n roll, country and folk musicians dot the musical landscape and bar gigs rule the roost, the county’s newest band is making a name for itself playing traditional bluegrass in a setting characterized by conversation and comfort – a coffeehouse.

That was exactly the case on the morning following Fall Festival weekend when tourists and locals in search of a much-needed boost of caffeine enjoyed an unexpected performance by banjo player Don Larson, guitarists Peter Brooks and John Nolte, and bassman Bill Reifsnyder, of Bedrock Bluegrass.

Holding themselves to the strictest standards of bluegrass instrumentation – banjo, guitar, bass and fiddle – Bedrock Bluegrass has been building a steady following of dedicated listeners at Brew Coffeehouse since the “quasi-band,” as Nolte calls it, officially came together this summer.

Since all of the members are semi-retired and the group is of intermediate musical ability, they enjoy the freedom of setting their own standards – hence the “quasi-band” reference.

“That kind of limits our venues,” Reifsnyder laughed. 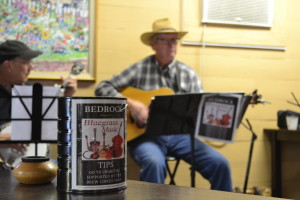 The group (which also includes summertime fiddler Carol Schmul) is as dedicated to playing traditional bluegrass as a band can get, counting among its musical influences the great Bill Monroe, The Dillards, Flatt & Scruggs, and Tony Rice. Drawing from a bank of 75 covers and original songs, the group puts together a set list of two-dozen songs for their weekly gigs at Brew, including audience favorites “Foggy Mountain Breakdown,” “Dixie Home,” “Wagon Wheel,” and “Tennessee 1949.”

“Bluegrass has been my favorite since I was 15 years old,” Nolte said. “I used to play the banjo so that’s how I got drawn into it. In fact, when I was 20 years old, there was a rock band with a banjo in it and I thought, ‘I really like that!’ so I wanted to learn how to play the banjo. Then I found out you can’t sing and play the banjo – at least I couldn’t.”

Their strict adherence to traditional bluegrass is really the only time the band is strict about anything, as is evident with the witty banter and senior jokes that fill in the space between songs.

“To be terribly honest,” Nolte started, “we like to sit rather than stand in front of our audience, we’re at the age where we can’t remember all the lyrics so we have our cheat sheets with us … we’re not held to high performance standards.”

For the folks at Brew on that Monday morning, those performance standards were high enough to keep them entertained while they enjoyed a cup of Joe and prepared for the week ahead.

“We like a listening audience and we like to entertain folks,” John said. “It’s a very casual interplay with our audience – joke around as we go. It’s not just strictly on a stage performing.”

Bedrock Bluegrass’ next performance at Brew Coffeehouse, 12002 Hwy 42 in Ellison Bay, is Oct. 31 from 11am – 1 pm. For more on the band and to see their schedule, find ‘Bedrock Bluegrass Band’ on Facebook.