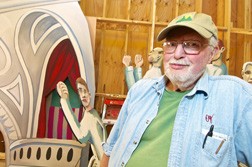 Scene designer James Maronek poses with some of his creations for “Chicago.” Photo by Len Villano.

Scott Boyle, the technical director, takes the drawings for the set from the set designer and uses a CAD (Computer-aided design) program on his computer to turn them into blueprints for the carpenters and interns. Construction of the new theater included a spacious design shop tall enough to hang backdrops for the stage at full length.

Chicago has four people hard at work creating costumes, with most of the work going for the female performers whose outfits take up three and a half clothing racks, leaving just half of one rack for the male actors. Some of the outfits are rented, some are bought, and a couple of vintage dresses hang on a door to provide a sense of the time.

“We buy outfits and modify them by glitzing them up,” explained Samantha Jones, the costume designer and wig master. “The Chicago outfits are very glitzy, but they also have to fit the performers well since they are dancing,” added Jones, who was sewing elastic bands into a corset so the actor could dance, sing and still breathe. 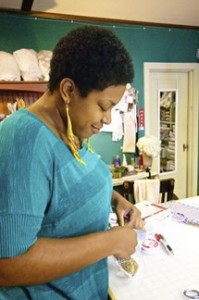 “Always be nice to the people who make the costumes,” she advised.

For Katrina Schuster, costume shop manager, the biggest challenge comes at the beginning of the season when she gets her budget and has to allocate funds among the very different shows. Opus, about a string quartet, had minimal demands on costuming, while Chicago has the highest production demands and Lombardi requires close attention to time and detail.

For that closing show, the Players is renting outfits from Milwaukee Rep, which gets expensive, but she knows enough to expect a critical audience.

“Being an hour from Green Bay, we can’t mess it up.”