Door County lost a long time friend when Bernard Fowler Rogers passed away on September 10, 2010. His death resulted from complications following open-heart surgery that had been performed two days before. Bernie was seventy-eight years old.

Known for his bright smile and youthful demeanor, Bernie Rogers had deep roots in Fish Creek dating back to the 1940s, when his family owned a summer home on Cottage Row, and scarcely a summer has passed since then that has not found him refreshing his spirit here. 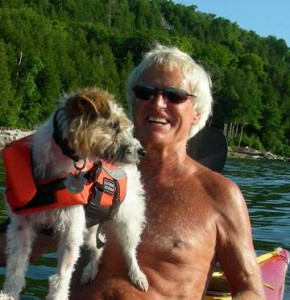 Bernie Rogers loved his time on the waters of Lake Michigan.

Born November 8, 1931, in Chicago, Bernie attended Middlesex School (Class of ’49) and Yale College (Class of ’53). His academic experiences provided a framework for his natural curiosity and keen artistic sensibility, nurturing in particular his life-long interests in literature and architecture. Following his graduation from Yale, he aspired to be a writer, but circumstance drew him into counter intelligence service in Japan. He subsequently attended the University of Innsbruck on the GI bill, before returning to Chicago, where he married Elizabeth (Bumpy) Elting, and had four sons – Mark, Michael, Paul and Christopher.

In Chicago, Bernie socialized with architects, writers and artists during a wonderful period of his life. He was the youngest trustee on the board of the Chicago Art Institute, worked with a black youth gang called the Vice Lords, was president of the Lincoln Park Zoo, went water skiing before work in the mornings, and took up gliding and hot air ballooning on the weekends. Following his divorce, after thirteen years of marriage, Bernie moved to New York to further his career with Marsh and McLennan, an insurance brokerage firm. In New York, he married Leslie Pasch Woods and was a father to her two children, Tony and Vandy Woods. That marriage lasted seventeen years.

Weary of the pace of city life, Bernie began spending time in Aspen, Colorado, where he built a small house on the Roaring Fork River. He also built homes in St. Barthelemy and Fish Creek. About this time, he co-founded Lost Man LLC., a pet company that produced active outerwear, to keep himself amused, relieve him of the onerous task of Christmas shopping, and bring pleasure and warmth to his family and friends. He spent as much time as possible in the outdoors, and in this setting he married Mary Conover, his wife of nine years.

In Door County, Bernie Rogers cherished the blue waters and lush forests. He walked the woodland trails and paddled sea kayaks, as he had done in childhood. While in his 70s, he circumnavigated the entire Northern Door Peninsula, including Washington Island. He often challenged much younger companions to endurance paddling, and loved nothing more than to survey the beauty of nature from the cockpit of his boat.

When not kayaking North Bay, Mink River, or Moonlight Bay with his friends Peter Diltz and Peter Boice, Bernie could be found sunning himself at an outdoor table at the Blue Horse, with ‘Tati’, his beloved Parson terrier, or dining at the Whistling Swan. Those who engaged him in conversation discovered a wry wit and sagacious mien, which gave Bernie the qualities of a cultural savant.

Bernie Rogers was joyously youthful. His vibrant spirit was revealed most beautifully when he smiled, which was often. His life-learned wisdom came as much from deep personal challenges as it did from the books he read and the thoughts he pondered. Bernie’s smile derived from the depths of a life buoyed by an undaunted spirit whose force shone on those – friends and family – who needed it most.

Bernie Rogers is survived by two sisters, May Jay Clay of Lake Forest, IL and Hope Haff of Jamaica Plain, MA, three sons: Michael Rogers of Lake Hill, NY; Christopher Rogers and Paul Rogers of Sag Harbor, NY; two stepsons, Tony Woods of New York City, NY and Nicholas Greenway of Aspen, CO; a stepdaughter Vandy Boudreau of San Francisco, CA, and six grandchildren. He loved all of his children and grandchildren deeply. He will be greatly missed by his family and by all those who had the good fortune to spend time with him.