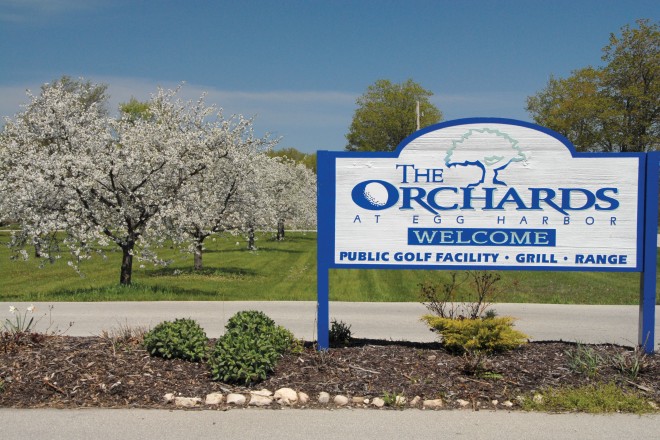 When the season opens this year at The Orchards golf course, it will be with an entirely brand new look. Returning golfers will be greeted with an impressive 9,500-square foot Cape Cod-style clubhouse built on the footprint of the original clubhouse constructed in 1999. Regrettably, the remodel was one of necessity due to a fire which totaled the  building on August 15, 2007.

Managing partner Jack Jackson recalls how gears shifted rather quickly after the fire happened. “It caught us off guard, but we had to figure out a way to keep the course running. That same day, we had a trailer in the parking lot which became our temporary club house.” The makeshift space became a compact version of everything the original building housed – the office, the pro shop and even a mini-restaurant where golfers could order food, albeit from a much more limited menu. Door County Memorial Hospital, as one affected customer, revised its annual golf outing into an outdoor picnic under a tent with hotdogs. Guests didn’t mind the new arrangements and claimed it was one of the best outings they have had to date.

Seasonal golf member Pat Fuller lives only five minutes away from the course and was saddened by the loss of the clubhouse. “The building burning down really left my friends and I with such an empty feeling. It felt like part of us went away.” Distressing as it was, and now that the new construction is complete, Pat and her friends are decidedly more joyful. “I mean, have you seen the place? Wow!” she exclaims. That wow factor will help everyone to move on. The new space is simply and aptly described as “bigger and better than ever.” Similar to how he runs the course, Jack has overseen every detail. Having formerly been in the construction business, Jack acted as general contractor for this project. (In addition, he and his business partners are developing a real estate project connected to the course called The Orchards Village at Egg Harbor.)

While the clubhouse features all the same components as before, there were several thousand square feet added. Members will still have the same view of the course through wall-to-wall windows and doors; however, there are enhanced design features now such as tray ceilings, hardwood floors and slate tile. The distinctly more elegant feel of the space and the fact that it is open to the public will undoubtedly attract customers for meetings, private parties and weddings. With this thought in mind, the kitchen was designed to accommodate parties of up to 200 guests. With Door County destination weddings becoming increasingly more popular, adding this facet was a wise decision. A dance floor was also added and is just waiting to be broken in.

The new clubhouse is certain to be a draw, yet the main component is the course itself. The fact that it is described as one of the toughest courses up here, public or private, is an appealing challenge for any golfer. “The front nine all have narrower shots. You really have to be able to place them,” member Pat Fuller explains. “The back nine are more open. Every time you play, it’s different. The nice thing is, though, golfers can play at every level.” Pat and her late husband, Dick, both felt right at home at The Orchards among the cherry and apple trees. Though he has been gone for six years, golf still plays a large part in Pat’s life. She just returned from visiting other Orchard members Jack and Marie Murphy at their winter home in South Carolina. Since Augusta, Georgia is just a short drive away, they went to see the Masters. Good inspiration certainly for their upcoming summer of golf in Door County.

Jack and his business partners have been happy with the success of their par 72 course. They attribute the growth in interest to the Bent Grass fairways and championship lengths, not to mention the fact that the course has matured nicely since its opening season in 2000. Customers attribute their return visits to Jack and his staff. “The service is great,” enthuses golfer Dennis Long. He and his brother Terry, both from Elmhurst, Illinois, have had many occasions to play the course. “During the summer, we like to get as much golf in as possible. Playing The Orchards is a treat. The staff is so friendly and the course is really well maintained.” The course is also credited with being left as natural as possible. And, after playing 9 or 18 holes, golfers can then return to the clubhouse to enter their scores into a handicap score computer right off of the conference room. Men’s and ladies’ locker rooms are another added convenience.

Both staff and golfers alike are really looking forward to this new beginning at The Orchards. The transition phase of planning and construction is over, so now all there is left to do is to enjoy the finished, and very much polished, result. There will be more room to hang out in the bar and grill to compare scores after a long day on the course; there will be more merchandise to choose from at the expanded pro shop; and there will hopefully be a little time to be grateful for what was spared:  the carts, the course and everyone so closely connected to them.