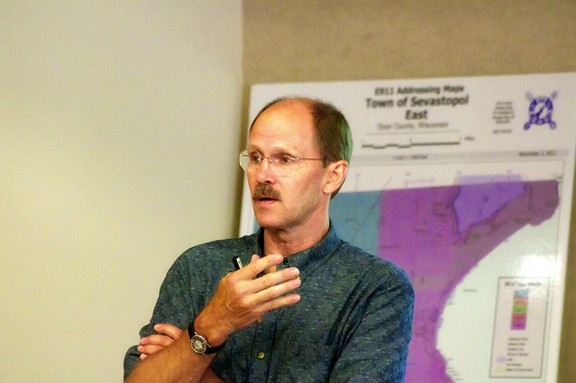 After 37 years at the helm of the Door County Soil and Water Conservation Department, Bill Schuster has retired. Photo by Len Villano.

In face of criticism, county native fights for peninsula groundwater

When you’re the man charged with enforcing new rules on a practice that went relatively unregulated for hundreds of years, you can expect to be criticized.

For Bill Schuster, the head of the Door County Soil and Water Conservation Department, which is tasked with enforcing groundwater protection regulations, the criticism is often personal. But in 36 years on the job, the Sevastopol native has learned to take such criticism in stride.

“One thing I’ve learned is that when people start attacking you personally, it usually means you’re right,” he said.

Schuster said that few people, farmers or not, even thought about groundwater quality when he took the job as the county conservationist in 1979. But in recent years farmers big and small have had their longtime practices criticized and sometimes condemned by conservationists and regulators.

“I get their frustration,” Schuster said. “Nobody likes to be told what to do. I don’t either. But we also can’t contaminate our groundwater.”

Schuster and his staff of seven are stuck between the public’s demands for clean water and the farmers angered by new, often costly requirements.

“Fifty percent of the people think that our office is far better than we are and the other fifty percent thinks we are far worse than we are,” said Schuster.

When he started working for Door County, he had a degree in geology and physical geography, a passion for the resources of his hometown, and a tiny office in the county sanitarian’s office. “I was too stupid to know the trouble I could get into,” he recalled.

Today, though the criticism can be fierce, he’s glad to still be working in Door County, where he’s built a department considered by many to have the strongest water quality enforcement powers in the state.

“I’m really lucky to have a county government that supports environmental work and conservation work,” he said, “in a place where the people value it as well.”