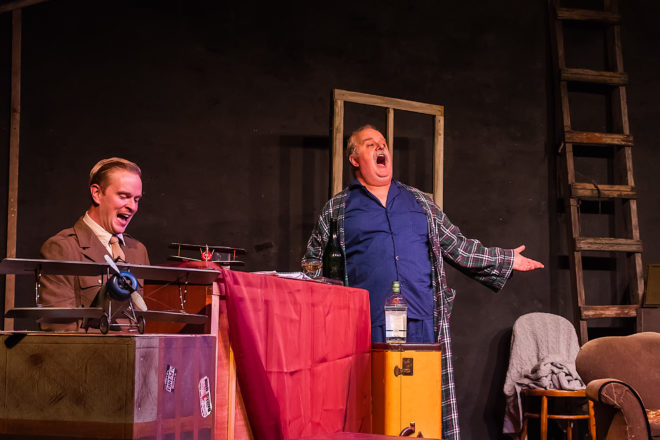 Billy Bishop Goes To War is on stage at Third Avenue Playhouse (TAP) until Oct. 21. This production features Ryan Cappleman and Drew Brhel and is directed by Robert Boles.

Written by John MacLachlan Gray with Eric Peterson, with music and lyrics by MacLachlan, Billy Bishop Goes To War is the story of irreverent hero and Canadian WWI flying ace Billy Bishop. In his heyday, no one was more famous in Canada than Billy Bishop, a pugnacious young pilot from Owen Sound, who was the terror of the skies during World War I. Bishop calls himself “a convicted liar and cheat who was the worst student ever at the Royal Military College … so of course they made me an officer.”

Eric Peterson and John MacLachlan Gray’s buoyant celebration of this complex man has a rich, nearly 40-year history of touring nationally and internationally. It remains one of the most critically acclaimed Canadian plays of all time. The music is comprised of barracks room ditties, Kipling-esque tunes of glory, Gilbert and Sullivan-like patter songs and a bitter brew of Brecht-Weill.

Cappleman, a performer, choreographer, music director and teaching artist from Milwaukee, portrays the piano player. His choreography for The Pirates of Penzance at the Skylight Music Theatre, where he is currently the Resident Music Director, earned him a Footlights Award.

Billy Bishop Goes To War is performed Wednesday, Thursday, Friday, and Saturday at 7:30 pm, and Sunday at 2 pm. Throughout the run TAP will collect donations of food, clothing and other items for Adopt A Soldier Door County. For a list of items to donate contact Nancy Hutchinson at 414.333.6648. Tickets for Billy Bishop Goes To War are $28 for general admission and $12 students. For more information visit thirdavenueplayhouse.com.