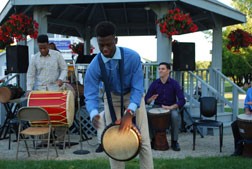 Pre-concert music began at 7:30 pm, with students performing traditional tribal dances and African percussive rhythms in the gazebo. Shortly afterwards, the audience took their seats in the Dutton Concert Barn in front of a stage packed with xylophones, marimbas, drum sets, steelpans, and other percussive equipment. At 8 pm, the concert began as a large group of students took the stage to perform “Dark Flight,” a piece by James Campbell, directed by faculty member Vicki Peterson Jenks. All of the aforementioned instruments were played, while some students crinkled plastic bubble wrap, creating a soundscape meant to evoke meteorites travelling through space.

The night continued with a number of faculty performances, including the popular hit, “Every Little Thing She Does Is Magic,” by The Police, and a solo marimba piece by faculty member Dan Moore titled, “All About that Space.” Another original faculty composition, “Nikkara,” featured Liam Teague on steelpan, Dan Moore on marimba, and Robert Chappell sitting on the floor of the stage playing his tabla, a traditional Indian double drum set played like bongos.