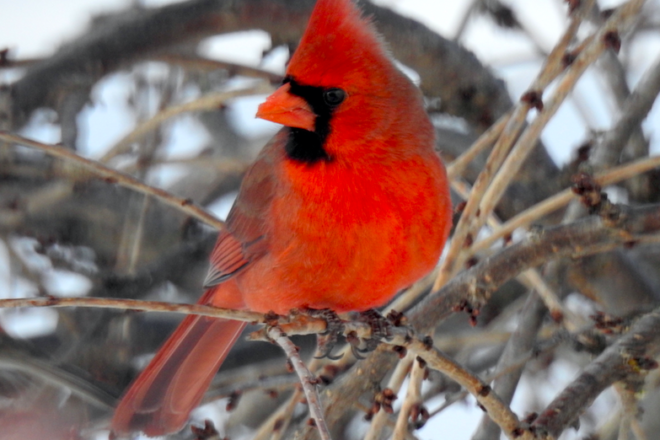 Northern cardinals have been the most frequently reported species during nine of the past 10 years on checklists submitted by participants in the annual Great Backyard Bird Count, which is taking place this weekend. Photo by Kevin Naze.

Like watching birds? Take it a step further this weekend by donating a few minutes of your time to a citizen-science project of global proportions.

The 23rd annual Great Backyard Bird Count (GBBC) will run Valentine’s Day through Feb. 17. All you need to do to participate is to count birds for 15 minutes or more, create a free GBBC account and enter your results.

Last year, more than 160,000 participants submitted their observations online, creating the largest instantaneous snapshot of bird populations ever recorded. Those observers counted more than 3 million birds, including an incredible 6,876 species worldwide. (For the record – and depending on which scientific analysis you believe – there are somewhere between 9,000 and 18,000 bird species in the world, including some that have yet to be discovered.)

The annual count, organized by the National Audubon Society and Cornell Lab of Ornithology, provides a great insight into wintering populations of birds in the United States and Canada, where most birders participate.

Launched in 1998, the GBBC is the first online citizen-science project to collect data about wild birds and display the results in near real time. Anyone can monitor the information as it’s submitted, and see counts and photos from past years. Anyone with an interest in the project and in birds is welcome to submit as many bird-count lists – and photos, if you’d like – from as many different locations as you wish during the four-day count period.

Get all the information about how to participate at gbbc.birdcount.org.

Less-than-ideal ice conditions and a Sunday snowstorm affected the opening weekend of the 2020 sturgeon-spearing season on Lake Winnebago.

The opening-day shanty count of 2,439 was only about half of a normal season, and just 44 fish were taken the first day. The largest on Winnebago was a 75-incher that weighed 107 pounds.

There was more success on the shallower upriver lakes, though the count of 101 harvested on opening day was the lowest since the lottery system for Lakes Butte des Morts, Winneconne and Poygan was implemented in 2007. The largest was a 75-inch 140-pounder.

Day two saw a snowstorm and big fish. An 80-inch 142-pounder was the heaviest of 30 speared on Winnebago, and the upriver lakes produced 23.

It’s been a tough year for anglers who like to drive out to their favorite spots on Green Bay. Even though colder air has improved the conditions in many popular bays, harbors and even offshore jigging areas, it’s not safe to go just anywhere.

Anglers are spread from Dyckesville to Sturgeon Bay, and north up the bay side of the peninsula. Whitefish are providing the best action, with some perch, pike, walleyes, trout and smelt also being hooked.

Be sure to check with employees at area bait-and-tackle shops for the latest ice and fishing reports. If you want to see some trophies pulled through the ice recently, visit Howie’s Tackle on Facebook to look for photos of a two-plus-pound perch and a 23.86-pound northern pike.

A couple of ice-fishing tournaments have already been held, and the annual Washington Island Lions Club Derby will wrap up this weekend. If you’re a tournament organizer who has results from an ice-fishing contest, please email them to [email protected] so we can share them with readers.

The fox and raccoon hunting seasons will end Feb. 15. Coyote trapping will end the same day, but coyote hunting remains open year-round. Cottontail rabbit hunting will run through Feb. 29, and crows may be hunted until March 20. Pheasant hunting is closed except on licensed game farms.

Free Fishing in the Upper Peninsula

Michigan’s annual winter Free Fishing Weekend is Feb. 15-16: a chance to try the Bays de Noc, Lake Gogebic and other popular U.P. destinations without needing to buy a nonresident license. All other regulations apply.