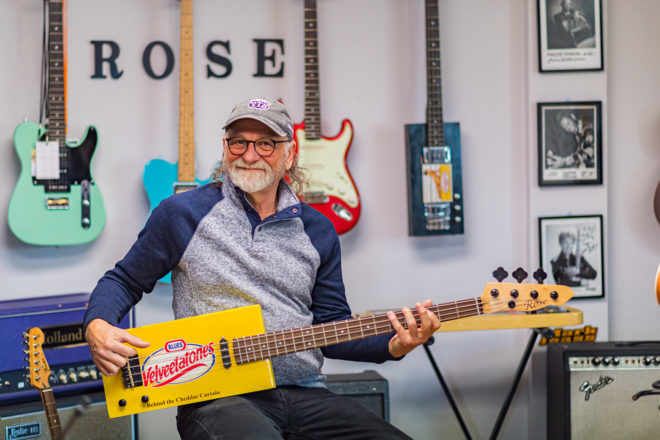 Like the pal who introduced him to Door County, Tony Menzer can light up a room with his enthusiasm for certain subjects: music, pottery, guitars, bass guitars and fellow musicians.

It was the late guitar player Chris Aaron who took Menzer to the place he now considers his home and where, for the past five years, he has operated Sturgeon Bay Music Exchange.

“The word got out that I’d finally legitimized my buying habit by opening a store, basically is what happened,” Menzer said with an infectious laugh.

“I’ve rescued a lot of guitars. People gave up on them,” he said as he picked up a 1962 Gibson 12-string that he had rescued. “The tops of these have a tendency to cave in,” he said.

He took the guitar to Green Bay luthier Tony Louscher, who used a technique to return the vintage 12-string to like-new status, as evidenced when Menzer makes it sing with a few strums.

In addition to guitars that Menzer has collected, he also spotlights some luthiers who sell exclusively in his shop and offers some consignment selling for customers.

“Chris had what it took to get up the popularity ladder immediately,” Menzer said. “We’d play a club once, and they’d ask us back. That’s rare.

“I’ve been involved with Steel Bridge since the second or third one. Chris brought me up. At the time, I ran a blues booking agency and was playing bass with Westside Andy and Clyde Stubblefield at Club Tavern in Madison [Middleton, actually]. Chris asked me to play on a couple songs on his album at the time, and after the third song, he asked if I wanted to join the band, part of a trio. That was on weekends, and I was with Westside Andy and Clyde during the week.”

The building where the Music Exchange resides is next door to, and a literal extension of, the iconic Holiday Music Motel. The building also includes the Tambourine Lounge, which features intimate Holiday Music Motel-inspired concerts and the Thursday-night WRiTER’S NiGHT hosted by Cathy Grier, with whom Menzer also happily plays when she has a full band.

Menzer had been living in Madison for decades when space opened up for his Sturgeon Bay music store.

Menzer is not kidding when he talks about his guitar-buying habit. It becomes apparent in the tightly packed, eye-boggling confines of the store.

“I still have things I bought in the ’60s and a list of stuff I wish I never would have sold,” he said with the frustration of a true collector.

“The people who pull in to the shop, they are coming because they know what they’re coming for,” he said. “I’ve been in the business a long time, and I’ve found a lot of great instruments for people.”

Rare, unusual and finely crafted instruments – some of which are sold exclusively in Menzer’s shop – are what separates Sturgeon Bay Music Exchange from most other guitar stores.

For example, Menzer pulls out a Lowebow instrument – a variation of a cigar-box instrument – made by John Lowe of Memphis, Tennessee.

“This particular one is made from the top of my father’s Magnavox console stereo,” Menzer said. “I think of my old man every time I play this. He was a country-music promoter. He didn’t play, but he’s the reason I got guitar lessons at 11.”

Those guitar lessons led to a life in the music business, both as a performer and promoter, particularly of blues music and festivals.

But for 20 years, Menzer also had a successful career as a world-class potter after earning a degree in pottery at the University of Wisconsin-Stevens Point.

His work appears in the fifth and sixth editions of the late Glenn C. Nelson’s Ceramics: A Potter’s Handbook, a work whose earlier edition was a textbook during Menzer’s college years.

“Being in that [book] definitely gave my work a major boost,” he said.

Through trial and error, kin modifications and consultation with a handful of other potters who were exploring the same uncharted territory, Menzer figured out how to do hand-thrown porcelain with zinc glazes fired quickly at extremely high temperatures.

“There were thousands and thousands of bad experiments,” he said. “Plus you’re depending on mines in different parts of the country, hitting different veins. I was working with a couple of other really sharp artists. We compared notes and all this other stuff.”

He has samples of the work on display at his music store, and their beauty is breathtaking.

Menzer went on to teach pottery at the two-year UW-Marshfield campus, referring to it as “pretty much the only day job I’ve ever had.”

Although he has many stories to share about his pottery experiences and the fascinating people he worked with and encountered in that world, he said after 20 years of it, he was ready for a new life.

“My wife at the time and I started having kids, and I wanted to be Mr. Mom,” he said. “My wife was climbing the corporate ladder. I had a really, really good career in this, but it was a good time to quit.”

Though he never left music during that time, Menzer was then able to focus more on the music. He moved to Madison and soon earned a reputation as the bass player to call, and he started backing people who were in the city for shows. He organized and promoted blues festivals. And eventually, he met guitarist Chris Aaron, a friendship that led to many musical opportunities and his move to Door County.

“So much came through Chris because that kid asked me to be on his record,” Menzer said. “When this opportunity came to open the store here, I sold the house in Madison and moved here. I love Door County. There’s so much work up here, and I’m so sick of driving. I’ve spent most of my life in the back seat of a car.”