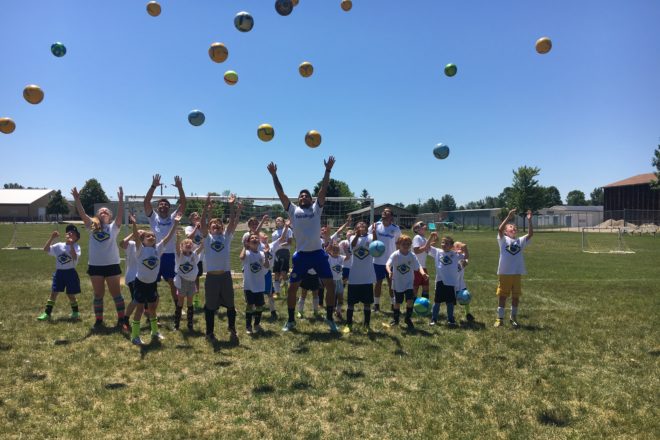 The 2016 Summer Olympic Games are fast approaching, set to take place in Rio de Janeiro, Brazil, Aug. 5-21. Rio 2016 will feature 28 Olympic sports. Among them, men’s and women’s soccer is sure to be a fan favorite and will help promote national pride from several countries that look to compete for Olympic gold. The men’s tournament will feature 16 teams while the women’s tournament will field 12 teams. The host country of Brazil remains one of the early favorites to earn a spot on the podium.

The camp, which took place at John Miles Park in Sturgeon Bay, offered both half-day and full-day opportunities for camp attendees, who ranged in ages from 6 to 14 years old. In addition to teaching soccer skills, the program is designed to share many of the Brazilian-style soccer techniques.

Those participating in the half-day camp received training on the basic skills of soccer. Coaches were particularly focused on refining player skills, introducing the fundamentals of teamwork, and encouraging fun. 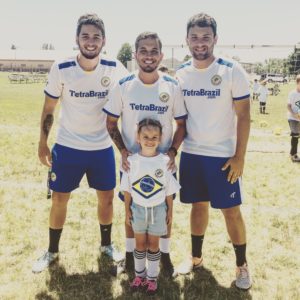 Three Brazilian camp coaches, all who have played for as long as they can remember, taught several soccer skills relating to tactics, techniques and conditioning. A few of the tactics learned were triangulations (the Brazilian method), combination plays and changing the point of attack. Techniques included the Brazilian style of a “give and go,” passing accuracy, free kicks, penalty kicks and shooting. Players also worked on improving their foot speed, flexibility, balance and overall speed training.

Iago Boaventura, 24, is in his first year with the TetraBrazil Soccer Academy. He began playing soccer in his hometown of Salvador, Bahia, in northeast Brazil. Following his participation in an exchange-student program as a high school student in Bethel, Okla., Boaventura enrolled to play soccer at Northern Oklahoma College before heading to Southwestern Christian University, also in Oklahoma, where he entered his senior season of collegiate soccer. He is currently pursuing a double major in international business and marketing while continuing to coach youth soccer teams in Oklahoma.

Boaventura was interested in playing soccer professionally, but as a teenager, he and his family decided that his education was his priority.

“In Brazil, when you want to play soccer, you try out for a professional team and then you play on their youth team. I did that when I was 15 and was approved, but my mom said she did not want a dumb kid, because I would have to drop out of school.”

He admits that he is thankful for making the decision when he did.

“Now it’s good. I am glad my mom did that because soccer is not something that is for sure,” he said. “Now I am still playing, I am having fun, and I am getting my degree. I love coaching. I love playing with the kids. It is so much fun.”

Boaventura notes the difference in the Brazilian style of soccer compared to the rest of the world.

“Soccer is huge worldwide. Players would be part of exchanges. A lot of Brazilians will go to Europe. The Brazilians’ style is what they call ‘joga bonito,’ which means ‘pretty soccer.’ It involves a lot of skill and finesse. In Brazil, we value not just scoring goals, but also dribbling and other skills. Here (in the U.S.) and in England, soccer is more physical. Brazilians play with more finesse.”

Boaventura will not head home to Brazil when summer ends. Instead, his preseason collegiate soccer season begins Aug. 8 in Oklahoma.

Kaio Lamounier, 22, is currently in his second year with TetraBrazil. Along with playing soccer in Brasilia, both his hometown and the capital of Brazil, Lamounier serves as a coach at the international school, School of the Nations, in Brazil, where he also teaches English to children. He earned his college degree and has plans to become a physical education teacher.

Lamounier acknowledged his decision to put his education first, although soccer remains one of his passions in life.

“I used to play soccer in college and high school. In my life, I was always more focused on studying. It is difficult to become a professional soccer player. I could not take the risk to keep playing and get nothing. To restart my life again would have been very hard,” Lamounier said. “I always loved soccer so I decided to work with it by being a coach.”

With Brazil serving as the host country of this year’s Olympic games, he is hopeful they can earn their first Olympic gold in soccer this summer.

“We don’t have an Olympic title yet, so we are really hoping to get this title back home. It is being played back in Brazil, so we need to get it,” he said.

As for his time in Door County, he mentioned that it was one of his top camps he has coached during his time with TetraBrazil.

“It is a really good experience. The kids are awesome. We can teach well because they are at a good level. This is the best camp that I ever did since I was with (TetraBrazil). The kids are real coachable.”

Door County is considerably quieter than his hometown of Brasilia, where the population is more than 2.5 million.

“(Door County) is a beautiful place to be. It is calm and quiet. I like that.”

Mauricio Santos, also 22, comes from Curitiba in the state of Paraná, Brazil and is currently in his first year with TetraBrazil. Santos has played soccer for his entire life and continues to coach club soccer teams in Brazil. He is also planning to work as a physical education teacher. He attended college at the Pontifical Catholic University of Paraná.

Santos is continuing to learn the English language and certainly enjoys working with kids in the United States.

“I play just for fun now, but I also coach kids in club soccer in Brazil,” he said.

When asked about his time in Door County, Santos was pleased with his visit.

“It’s a beautiful place with nice people. It’s a very nice place to be,” he said.