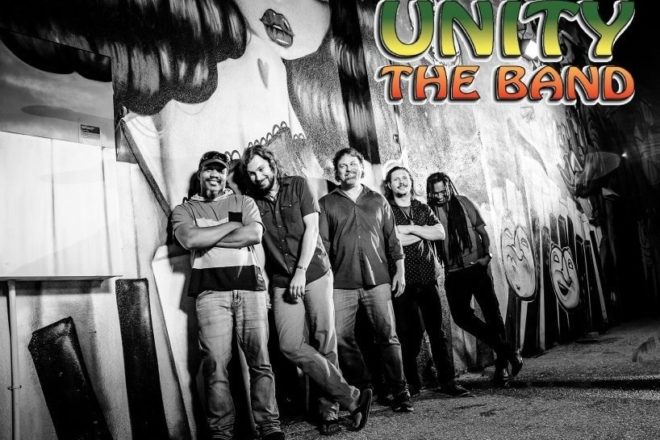 Unity will entertain the crowd at One Barrel Brewing on Oct. 12. Submitted.

“One love. That’s the truth,” insisted Kai “Pita” Katobalavu – lead singer of Unity the Band – at the end of our phone call. I’ve never spoken to anyone who is as passionate as he is about music being a solution.

This reggae group’s agenda is to work as a team to promote family, community and unity through music, and it’s been doing so since 2003.

Though the band has been in the business for a while, it’s nowhere near slowing down. In fact, this summer was its busiest yet, Katobalavu said. This year Unity has traveled from Florida to the Northwoods to the Fox Valley, where it’s based, and the crowds were twice as big.

Katobalavu grew up in Fiji and taught himself music through the instruments, songs and dances that are native to the island. Later he moved to the Hawaiian Islands and played in a few bands before coming to the Midwest in 2002. He started Unity when he moved to Wisconsin.

It was here that Katobalavu began to share original reggae music. Unity has taken many shapes over the years through a rotating set of members – an evolution that has allowed him to work with all sorts of eclectic musicians.

The current band members all have different tastes, Katobalavu said, so it’s a learning curve when they write together. Some members are interested in country music, some in blues and some in jazz, and they try to combine and center their writing around reggae. It’s important that they bring individual flavors to the sounds, all while having a mutual respect for one another and the music.

“When you love music, everything just kind of falls together,” Katobalavu said. “When we’re playing, we’re all in unison.”

When considering new members to join the band, Katobalavu looks for musicians who are going to bring their own “spice” to the songs Unity already performs. He said that’s the key to making great music.

“We don’t want them to follow or mimic anything that the other person did,” Katobalavu said. “We want them to bring their identity to it.”

Rehearsing together isn’t always as easy. This year, Unity went 150 shows without having a rehearsal, but typically its members get together once a week. They’ll get the chance to do that again when things slow down during the winter.

When they’re busy, though, rehearsal could mean a phone call, email or listening to their music to make sure there’s an understanding of what’s needed for a certain song or project. It’s all about communication.

“Rehearsal could be anywhere,” Katobalavu said. “Sometimes we’ll be rehearsing and having dinner at the same time.”

Winning over the crowd is just as important as the music. Katobalavu said Unity is always pushing the envelope for every single show. The band’s members are grateful to people who enjoy live music, and they love getting feedback. They want to be able to appeal to every crowd, and if they don’t manage to do that, they want to know about it.

It’s also been important for the band to support local acts and the venues that host it, so the group makes an effort to do that, no matter where it’s playing.

“We’re a family after the end of time and we all go home,” Katobalavu said. “We’re still a community.”

Unity the Band is touring into the fall, with Door County stops at One Barrel Brewing Company in Egg Harbor for Pumpkin Patch on Oct. 12, and at Husby’s in Sister Bay the following weekend.

Every show is equally important, Katobalavu said, but the band’s members look forward to seeing old friends at JJ’s and Husby’s, at the coffee shops and the brewing company.

“Door County makes you feel like you’re on vacation,” Katobalavu said. “Even the people that live up in Door County are very laid back. [Door County] has their own niche in the world, and we just love to be a part of it.”

Aside from its fall tour, Unity has a lot of big things coming up: The group has just built itself a new studio, has an album ready for release and is launching its own label.

Unity hopes to use the label as an avenue for artists who are looking to get their foot in the door, no matter their age. It wants to offer support to smaller bands – something that Katobalavu wished would have been there for Unity when it started out.

“We want to be there to be a stepping stone for them,” Katobalavu said. “In the long run, it is music that binds us together. We need more music now in the world than ever.”