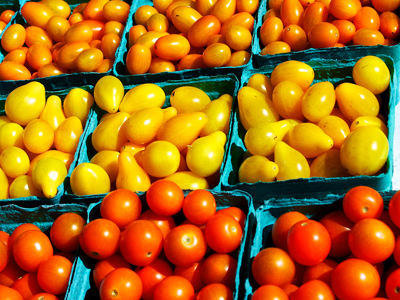 Marc Savard is one of an increasingly rare breed – a farmer in northern Door County.

The cost of land, property taxes, and development pressure has made farming a largely unsound financial venture on the thumbnail of the peninsula, and for those who are sticking it out it’s a struggle to peddle your wares. Many small farmers try to make a go of it at weekend markets, erratic restaurant connections, and roadside stands. Savard says selling is the biggest challenge for folks in the business of growing.

“It’s so much work to market your stuff,” he says, “but that’s the last part of the game and farmers just don’t have time for it.”

He says a big hurdle for local agricultural producers to overcome isn’t so much in creating demand for their wares, but spreading awareness of where to find them.

So Savard talked to County Administrator Michael Serpe, who tasked Dean Volenberg of the Peninsular Agricultural Research Station to put together a list of all the agricultural producers in Door County, a one-stop resource for those looking to find Door County products or striving to buy local.

As it turns out, the timing of the idea couldn’t be better. Dr. Gary Green, a rural sociology researcher at the University of Wisconsin, is working on a research project to pinpoint the actual economic impact that buying locally produced products has on a community.

“Door County has a reputation as being advanced in local markets,” Savard says, though he feels we could be much farther along. Because of this reputation, the researchers are using the peninsula as the pilot project and expect the work here to establish how other initiatives throughout the state are measured.

Dr. Green could not be reached to comment for this story, but his team has worked with Volenberg, who described the objective of the study as an attempt to analyze how the three pillars of the local agricultural economy – producers, tourists, and end product users such as restaurants, grocers, retailers and farm markets – interact and impact the local economy.

The researchers began work in November backed by a grant from the state. They conducted interviews with local restaurant owners in an attempt to determine if local producers get credit for their products and whether it is used and seen as an effective selling point. In short, do customers buy more, or are they willing to pay more, for locally produced products?

Andy Coulson of Fish Creek’s White Gull Inn was one of the restaurateurs they interviewed. He says it’s difficult for him to measure the marketing affects of featuring local products because for a long time he didn’t think of local products in terms of advertising.

“Some local products we’ve used for decades,” he explains, “but often just because it was the easiest way to get them. Now there are a lot of restaurants featuring local food and doing a good job of marketing it. The interesting thing is we’ve been using them so long without thinking about it that we never thought to use it in a marketing sense.”

Coulson cites Door County cherries, whitefish (in the thousands of pounds each year), and maple syrup among some of the most recognizable products his restaurant uses. But he also mentions other, less famous Door County products as well, such as asparagus and rhubarb which often comes from the Coulson’s themselves or the gardens of their staff.

“An enormous percentage of the food we go through is locally sourced,” he says.

Some arrangements are spur of the moment – “I’ve got some extra tomatoes – need some?” while others are more formal with small farmers.

Coulson says the use of local products is definitely a draw, whether used incidentally or in a specific marketing niche.

What Savard and Volenberg hope to accomplish by creating the list is simple.

“The goal is to get people to buy local agricultural products,” Savard said. “We want to make the list as comprehensive as we can so people can access producers. My guess is there are hundreds out there.”

“It’s broader than food,” he says, “We’re looking for producers of any agricultural product no matter how you grow it. The emphasis is on local, we’re not making any value judgments on how you grow it.”

“I’m interested in those who both raise and sell locally,” Volenberg stressed. “Not just food – wool, alpaca hair, honey.”

The push to buy local has taken off in the last couple years as fuel prices have skyrocketed and sustainability has emerged as a buzzword in everything from development, to energy, to growing. Savard thinks Door County is leaving dollars on the table each day consumers must embark on a treasure hunt to buy local.

“I feel there’s a huge untapped market of people who love Door County and its authentic products but don’t have time to do the looking,” Savard says.

Upon completion Volenberg hopes to put the information into a guide and make it available to the public through visitor centers and business associations. Those who think they qualify and would like to be included can contact him at the Peninsular Agricultural Research Station by calling 920.743.5406.

The list will also serve as a resource for restaurants to use if they choose to emphasize local products. Currently, Savard says growers have to approach – and often convince – restaurants to buy their products. The list should make the relationship run a little smoother, to which end Volenberg asked Green’s researchers to ask restaurant owners and other buyers what other products they’re looking for that aren’t available locally. He hopes the answers to that question will help producers determine what to bring to market.

Volenberg doesn’t expect complete results from the study until 2009 at the earliest. Until then, Savard hopes the list itself will help local producers see an impact.

“An enormous amount of people would like to make a better living off this,” he says. “It’s flat out better stuff, better quality, and better for the environment.”

“It has a great impact on tourism,” he says. “Door County has always been looked at as a wonderful combination of agriculture, maritime, and the arts. People don’t want to look only at vacation homes – they want to see an open field, a pastoral sort of scene. If this is encouraging people to stay in the agricultural lifestyle, then it’s a plus for tourism.”

But Coulson says it’s not all about the visitors.

“There are advantages all over the place. It makes the county a more desirable place to live.”