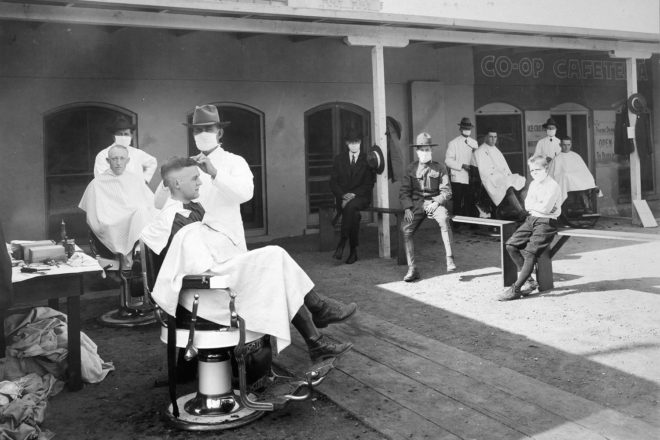 An open-air barbershop in Berkeley, Calif. Public events such as school classes, church services and court proceedings were encouraged to be held outdoors to hinder the spread of the disease during the influenza epidemic. National Archives photo.

This year marks the 100th anniversary of the worldwide flu pandemic, the deadliest outbreak in human history. Flu activity was first detected in military camps in the spring of 1918, being the first of three waves of the illness that lasted into spring of 1919. As World War I was being fought at the time, U.S. officials kept mum on the initial outbreak in order not to affect war morale. It was dubbed “Spanish” flu not because it originated in Spain but because that country remained neutral in the war and freely reported on the flu. Scientists had not yet discovered viruses, so prevention and treatment were limited to promoting personal hygiene and quarantine. In October 1918, the Wisconsin Board of Health issued advisories to communities to discourage public gatherings. Schools, churches and movie theaters throughout the state and in Door County were closed for several weeks. Scientists have since determined the flu was caused by the H1N1 virus with genes of avian origin. Some suspect it originated in the United States.

The number of years that were shaved from from life expectancy in the U.S. due to the flu pandemic. It dropped to 36.6 years for men and 42.2 years for women. A unique feature of this pandemic was a high mortality rate for people 20 to 40 years old, in addition to the susceptibility of the very young and very old.

The percentage of the population of the Fiji Islands that died from the flu.

The number of soldiers who reported ill with the flu in a single day in September 1918 at Camp Devens, Mass., an Army training base where 45,000 soldiers were stationed. It was the first place hit by the second wave of flu that fall.

The number of Americans who died from flu in October 1918.

The number of flu deaths in the United States during the outbreak.

The number of flu deaths worldwide during the outbreak.

The estimated number of people who were infected with the virus, or about a third of the entire population.